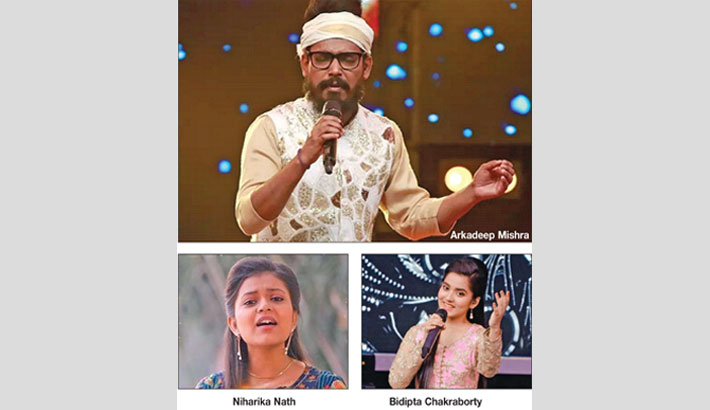 The Indian music reality show ‘Sa Re Ga Ma Pa 2020’ has crowned its winner. Arkadeep Mishra won the title of this season. It was an overwhelming moment for the entire team as the season reached its melodious end declaring contestants Niharika Nath as the first runner-up and Bidipta Chakraborty as the second runner-up, reports Times of India.

Arkadeep received Rs. 5 lakh and other prizes. While speaking about his winning moment, Arkadeep told ETimes TV, “I never thought, I will be the champion. Even when we were the last two contestants standing on the stage awaiting the verdict, winning was the last thing in my mind. It took me a few hours, to realise that I won the competition. And suddenly it felt good.”

Special guest Shankar Mahadevan praised Arkadeep after his performance and also sang a few lines during the event.

Arkadeep, who won the hearts of the viewers with his soulful folk songs, has been a consistent performer. Niharika, Bidipta as well as finalists Raktim Chowdhury and Jyoti Sharma also paved their ways to the Bengali households with their melodious performances.

Judges Srikanta Achaya, Mika Singh, Joy Sarkar, Akriti Kakar, and the mentors praised all the contestants who made it to the finale. The Grand Finale witnessed a star-studded musical event attended by music maestros Sivamani, Shankar Mahadevan, KK, Shaan and many others. Judges Mika, Akriti, Srikanta and Joy took the audience on a melodious journey with their songs in the finale.

The singing reality show, hosted by actor Abir Chatterjee, started its journey in September 2020. The show, which welcomed 45 passionate singers in the Grand Audition, started its journey with 27 of them. Over the last 6 months, the contestants were trained by the mentors and groomers. After several rounds of elimination, 6 talented singers made it to the grand finale.