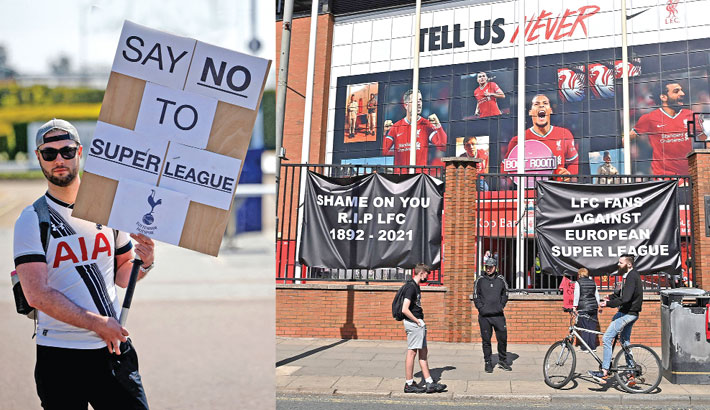 Fans of the six Premier League clubs leading the breakaway European Super League have slammed the controversial plan, branding it the "ultimate betrayal".

The founding clubs will share 3.5 billion euros for infrastructure investment and to offset coronavirus pandemic costs.

They are expected to receive a further 10 billion euros in "solidarity payments" over the life of the initial commitment, convincing them to turn their backs on the Champions League in favour of the new invite-only competition.

Reaction to the incendiary scheme has been furious, with football's governing bodies FIFA and UEFA, as well as all the leading domestic leagues condemning the "cynical" plan. While their clubs would gain financially from the move, supporters of the Premier League teams involved were united in their contempt for such a nakedly greed-motivated project.

The Chelsea Supporters' Trust said in a statement: "Our members and football supporters across the world have experienced the ultimate betrayal.

"The CST is appalled that Chelsea FC (CFC) are among the rumoured teams to have signed up for this alternative competition and hope that these reports are untrue. This proposal would risk CFC from being banned from other competitions and could jeopardise the future of our club.

"This is a decision of greed to line the pockets of those at the top and it has been made with no consideration for the loyal supporters, our history, our future and the future of football in this country. This is unforgivable. Enough is enough."

Liverpool supporters' group Spirit of Shankly (SOS) said it was "appalled" by the decision of Fenway Sports Group, the club's US-based owners, to take part in the plan.

"FSG have ignored fans in their relentless and greedy pursuit of money. Football is ours, not theirs. Our football club is ours not theirs," they said in a social media post.

The Arsenal Supporters' Trust called the club's agreement to join "the death of Arsenal as a sporting institution".

The Manchester United Supporters' Trust labelled the plan an insult to the legacy of the players who died in the 1958 Munich air crash. "A Super League based on a closed shop of self-selected wealthy clubs goes against everything football, and Manchester United, should stand for," they said.

Tottenham Hotspur Supporters' Trust said the European Super League was a "concept driven by avarice and self-interest at the expense of the intrinsic values of the game we hold so dear".