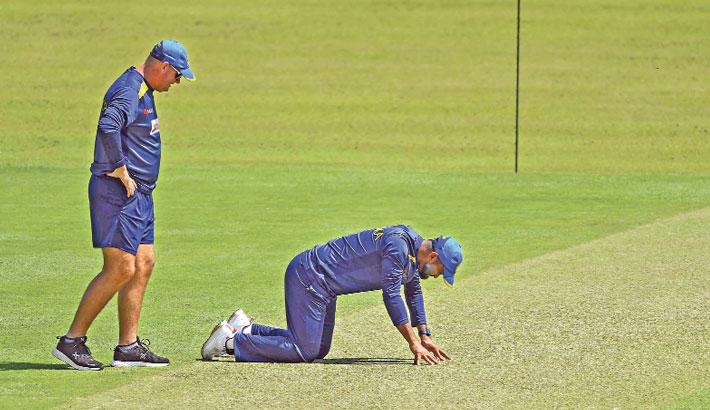 Sri Lanka captain Dimuth Karunaratne (right) and head coach Mickey Arthur inspect the pitch during a practice session ahead of their first Test against Bangladesh in Kandy on Monday. – SLC PHOTO

Sri Lanka received an injury scare ahead of the opening Test against Bangladesh as young left-arm pace bowler Dilshan Madushanka picked up an injury during the practice session on Monday.

While other cricketers were seen practising at Pallekele International Cricket Stadium where the hosts practised after a gap of two years and seven months, Madushanka was seen spending more time with the team's physiotherapist.

Captain Dimuth Karunaratne and coach Mickey Arthur had a close look at the green-top wicket soon before the start of training while Chaminda Vaas was busy with other bowlers. The Sri Lankan team started their camp in Kandy on April 16.

Meanwhile, Bangladesh team reached Kandy on Monday ahead of the two-Test series. According to a BCB official, who is touring with the team, the selectors are likely to announce a 17-member final squad for the Test series after the team’s practice session today.

Despite the intermittent rains in various parts of Sri Lanka during these days, Pallekele International Cricket Stadium and the surrounding area received good sunshine and the weather was more conducive to cricket.

The first Test will start on Wednesday.