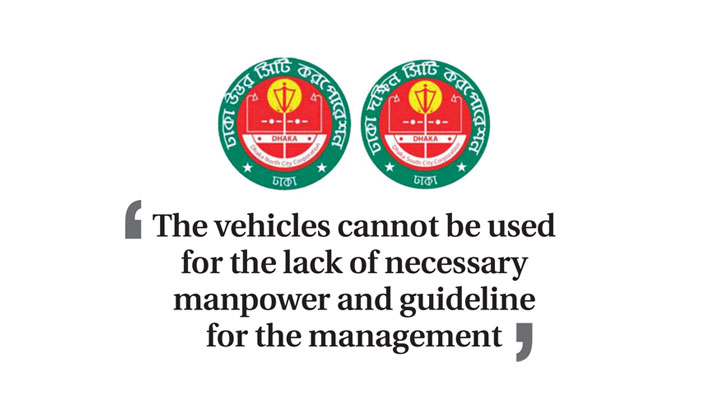 When city residents are struggling to manage ambulances or mortuary vans to carry patients to hospitals or dead bodies to graveyards, the ambulances and mortuary vans of the two city corporations of Dhaka are lying idle.

DSCC and DNCC officials said that the vehicles, meant for use for health service, have remained in the warehouses due to lack of necessary manpower and a guideline for management of the service.

Record shows that some 10 ambulances and four mortuary vans were bought for carrying patients and dead bodies under Urban Resilience Project. The vehicles were handed over to the authorities of the two city corporations in February 2019.

They also said under the project, some drivers, engineers and officials of Dhaka North City Corporation were trained up in Malaysia in January 2019 for the operation and maintenance of the vehicles.

Contacted, Chief Welfare Officer of DSCC Akanda Mohammad Faisal Uddin and focal point officer of urban resilient project DSCC part Sirajul Islam said that they were aware of the use of the vehicles.

Talking to the Daily Sun, Chief Health Officer Brig Gen Md Zobaidur Rahman said the vehicles cannot be used for the lack of necessary manpower and a guideline for the management.

Zobaidur said, “We don’t have enough number of drivers to operate the ambulances. There is also no guideline on the appointment of drivers and their salary, fuel cost and maintenance.

We recently held a meeting on the topics and we prepared a guideline in this regard.” He hoped that they would launch the service for the city residents very soon.