They don’t give a damn !

Rise in corona deaths fails to deter people from venturing out 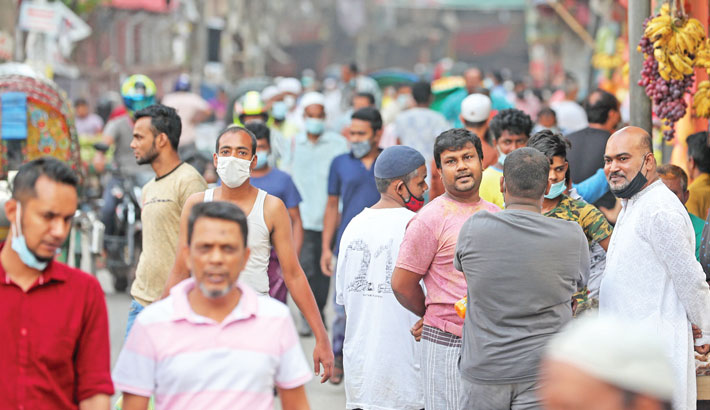 People crowd different roads and places in the capital, ignoring health guidelines despite the countrywide complete lockdown. The photo was taken from Kazi Alauddin Road in Old Dhaka on Monday. – Reaz Ahmed Sumon

Police said people in large number are coming out their residences on lame excuse and rushing towards streets, footpaths and kitchen markets.

Law enforcers are seemingly failing to tackle the stream of people and vehicles on streets.

It appears that they have all but forgotten about the protective measures -- wearing masks, social distancing and washing hands -- that can keep the virus at bay.

Health rules were hardly maintained at the kitchen markets while cars, rickshaws and auto-rickshaws moved around freely.

In some areas of the capital, severe traffic congestions were created on Monday, the sixth day of the countrywide week-long lockdown.

In most cases, policemen on duty were not taking any measures against the lockdown breakers.

Witnesses said although the number of vehicles on the city roads was less at the beginning of the lockdown, now all types of transport except buses are seen.

Moreover, the movement of people has also increased on the streets despite the government’s strict restrictions on their movement.

In some places, the police have to handle the traffic as usual. Even minor traffic jams were observed at some signals.

In the morning, heavy traffic was seen at important check posts in the city, including Hatirjheel, Bijoy Sarani, and Natun Bazar.

The presence of vehicles in Malibagh, Motijheel, Kakrail, Paltan and Shahbagh areas was also much higher than the past few days.

At the beginning of the lockdown, rickshaws and CNG-run auto-rickshaws were seen transporting one passenger at a time. However, they are now transporting two to three people.

A police officer on duty at Rampura Bridge section of Hatirjheel said, "Whoever we stop falls under the 18 conditions of the government notification and we cannot take any action. That is why the traffic pressure is high.”