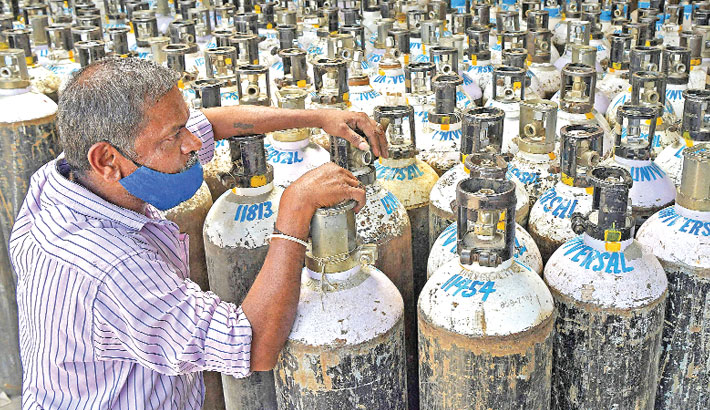 A worker is seen sorting oxygen cylinders that are being used for Covid-19 patients before dispatching them to hospitals at a facility in Bangalore on Monday. – AFP PHOTO

NEW DELHI: India’s capital New Delhi will impose a week-long lockdown from Monday night, officials said, as the megacity struggles to contain a huge surge in Covid-19 cases with hospitals running out of beds and oxygen supplies low, reports AFP.

In Delhi—the worst-hit city in India -- 25,500 fresh cases were reported on Sunday, with almost one-third of those tested returning positive coronavirus results. “Delhi’s health system is at a tipping point. The Covid-19 situation is pretty critical,” Delhi Chief Minister Arvind Kejriwal said in a televised address.

“If we don’t impose a lockdown now, we will be looking at a bigger disaster. From tonight there will be a lockdown until next Monday.”

He said businesses would be shut and movement around the northern city of 20 million limited to essential services, from 10:00 pm on Monday to 5:00 am the following Monday. “The lockdown doesn’t end the pandemic but just slows it. We will use this week-long lockdown to improve our healthcare,” he said, adding that the healthcare system was “under severe strain” and had “reached its limit”. In the last seven days, India has recorded more than 1.4 million cases—an increase of 64 percent on the previous week, according to data compiled by AFP.

Experts blame complacency about the virus, with the spike coming after daily cases fell below 9,000 in February. There is also growing concern that virus variants, including a “double mutant”, are fuelling infections.

“It looks like the second wave is due to fast-spreading variants... It’s spreading much faster than the first wave,” virologist T. Jacob John told AFP. Following the announcement, long queues formed outside Delhi’s food and alcohol stores in several neighbourhoods, in scenes reminiscent of the rush ahead of last year’s nationwide lockdown.

Kejriwal tried to address fears that the lockdown would be extended, appealing to migrant workers not to leave Delhi. Last year’s harsh restrictions put millions of poor daily-wagers out of work, with many fleeing cities for their villages—often on foot with some dying along the way. “I hope it is not a long lockdown. It gets really tough for people like us,” said flower vendor Surinder Singh.

“We are very scared, everyone is scared,” added Sunil Kumar, 25. “One week is good, at least there’s no economic downside.” By Monday evening, thousands of workers crowded Anand Vihar Terminal in east Delhi, waiting to take buses to their home states of Uttar Pradesh and Bihar, according to an AFP reporter on the scene.

The northern state of Punjab on Monday announced further restrictions, including an extended night curfew. The national government has said it will address states’ appeals for more medical supplies.

“Two of our furnaces are not operational as the frames are melting and gas burners are getting clogged as the furnaces are constantly in use,” said Prashant Kabrawala, the manager of Gujarat city Surat’s biggest crematorium.

Experts warned that religious festivals, including the Kumbh Mela attended by millions of pilgrims, and packed state election rallies had become “super-spreader” events.

Following a call from Prime Minister Narendra Modi for its rituals to be observed symbolically, officials at the Kumbh Mela in the northern city of Haridwar said the festival’s main sects had left and the “site is nearly empty”.

Nearly 3,900 people have tested positive in the past week in Haridwar, according to local authorities.

In West Bengal, where state elections are ongoing, Chief Minister Mamata Banerjee urged people not to panic as she shut government schools and cut back on political rallies.

Experts urged India, home to the world’s biggest vaccine maker, to speed up its inoculation roll-out.

“The only long-term solution to Covid-19 is to vaccinate as many people as possible,” Ashoka University physics and biology professor Gautam Menon told AFP.