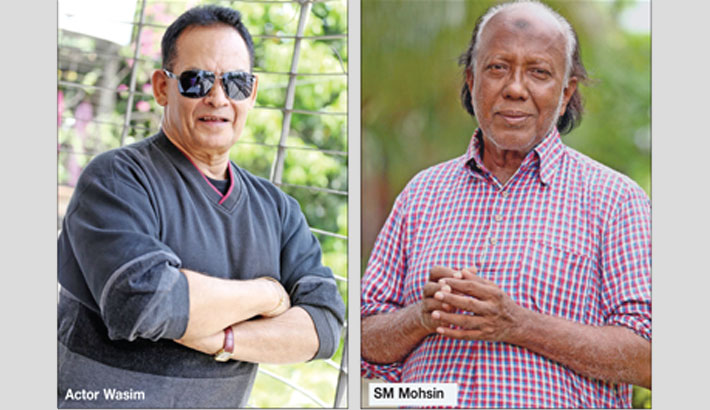 A day after the death of legendary film actress Sarah Begum Kabori, the cultural arena has lost another two big stars, actor Wasim and theatre activist SM Mohsin on Sunday.

Popular actor of Dhallywood’s golden era Wasim passed away at Shahabuddin Medical College Hospital in the capital early Sunday after battling with various old-age complications. He was 74.

Another renowned theatre activists and Ekushey Padak-winning actor SM Mohsin died of coronavirus at BIRDEM General Hospital in the morning. He was 73.

SM Mohsin was admitted to Holy Family Red Crescent Medical College Hospital with corona infection on April 5. He was then shifted to the Intensive Care Unit (ICU) of Impulse Hospital after his condition worsened. Then he was taken to BIRDEM General Hospital, where he breathed his last.

He was laid to rest at Azimpur Graveyard after Asr pryers.

A pall of gloom descended on the cultural arena following the death of two popular artistes.

Born as Mesbahuddin Ahmed on March 23, 1947, Wasim started his silver screen career as an assistant director of film ‘Chhando Hariye Gelo’ (1972), directed by S.M. Shafi. His acting debut came through the film ‘Rater Por Din’ (1973). Popular actress Babita was his co-artiste in the film.

Wasim soon rose to his fame with the success of his silver screen projects.

He reigned as one of the top heroes in Dhallywood from 1983 to 1990, mostly for his role in folk fantasy and action films. He acted in about 152 films in his acting career before unofficially retiring from the industry in 2010.

His film, ‘The Rain’ was dubbed in 47 languages and shown in many theatres across the globe.

In 1964, he was crowned as ‘Mr. East Pakistan’ for bodybuilding and for being the fittest person of the then East Pakistan. He is often considered as the first bodybuilder actor in Southeast Asia.

Wasim served as the first Secretary General of the National Sports Council. He was also the President of the Bangladesh Bodybuilding Federation for a brief period of time.

He actor was laid to rest at Banani Graveyard after Juhr prayes following his namaj-e-janaza.

On the other hand, SM Mohsin was born in 1948 at Mirzapur, Tangail and completed his alma mater in Bangla and Journalism at Dhaka University. He later channeled his knowledge through becoming a faculty member of the Department of Drama and Dramatics at Jahangirnagar University.

Mohsin also served as acting director-general of Bangladesh Shilpakala Academy and also the first project director of the National Theatre. He became an honorary fellow of the Bangla Academy in 2018.

In his four-decade career, Mohsin acted in many notable theatre productions, including, ‘Rokte Bheja Shapla’, ‘Kobor’, ‘Chithi’, ‘Dipantar’, ‘Subachan Nirbasane’ and ‘Chup Adalat Cholchhe’. He was actively involved with the theatre troupe Drama Circle. He made his radio debut performing in a play named Padakshep.

Mohsin gained huge popularity as a television actor with his performances in many dramas, including, ‘Mohor Ali’, ‘Sakin Sarisuri’, ‘Gorom Bhat Othoba Nichhok Bhuter Golpo’, ‘Nilambari’ and others.

He also acted in films ‘Chitra Nodir Pare’, ‘Brihannala’ and others.

He completed his last film shooting for the movie ‘Antaratma’ on April 2, starring Shakib Khan and directed by Wazed Ali Sumon.

SM Mohsin won Ekushey Padak for his contributions to the cultural arena in 2020.  He also received Shilpakala Padak in 2017.