Movement of people, vehicles on the rise 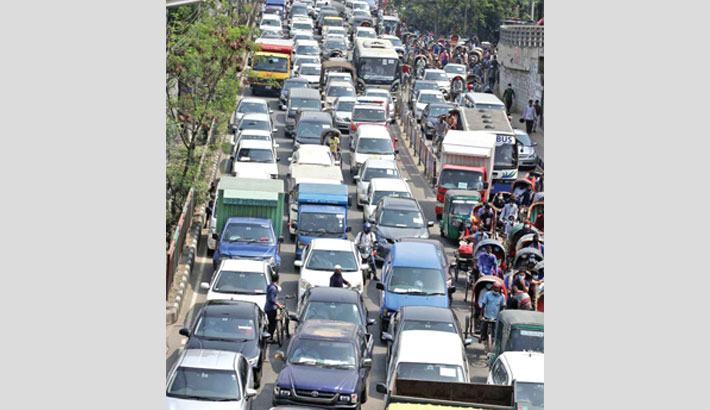 Vehicles get stuck in a tailback on Rampura road in the capital on Sunday amid the strict lockdown enforced to contain the spread of coronavirus in the country. – SUN PHOTO

Law enforcers struggled to tackle an increased number of both people and vehicles in the capital and elsewhere across the country on Sunday, the 5th day of the complete lockdown aimed at curbing the spread of coronavirus.

Despite an alarming spike in deaths and infections from the virus, people ventured outside and thronged kitchen markets while vehicles hit streets in large numbers.

Long tailbacks were created on many streets, including Airport Road, throughout the day.

On the Airport Road, traffic gridlock was created from Banani to Uttara from around 10:00am, witnesses said.

Law enforcers, including police and Rapid Action Battalion (RAB) personnel, were seen performing their duties at different parts of the capital.

Police were checking for movement passes enthusiastically like the first few days. However, in some checkpoints, police were not checking vehicles.

No public transport was available on the roads but the number of private vehicles, rickshaws and auto-rickshaws was higher than the previous days as garment factories, banks and organisations providing emergency services resumed operations on Sunday after weekly holidays.

A senior official of Uttara Traffic Division under Dhaka Metropolitan Police said the vehicular movement increased because of office-goers.

Although government and private offices were asked to remain closed during the "strict lockdown", factories and banks are operating while and emergency services remained outside the purview of the shutdown.

On the city roads, all modes of vehicles except public transport were seen on the move.

At some points, vehicles stalled for a while because of heavy traffic while in other places, traffic police were seen controlling vehicular movement manually.

There were more rickshaws on the streets on Sunday than last four days.

The government issued a transportation ban and ordered a shutdown of all offices, including shopping malls, markets and restaurants, from Wednesday to curb the coronavirus infections.

The lockdown will continue till Apr 21 midnight.