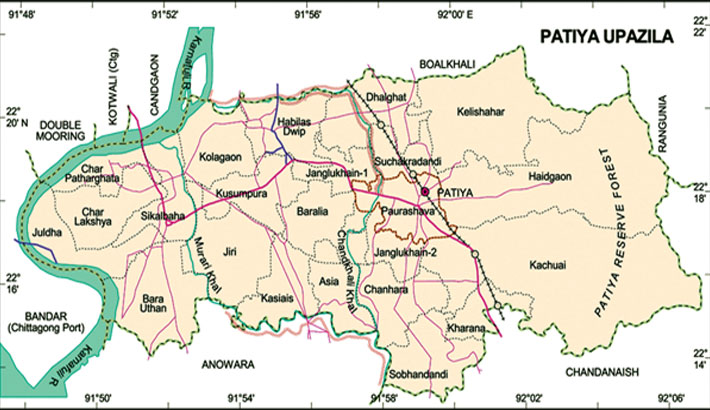 The family of Whip Shamsul Haque Chowdhury has established a crime kingdom in Patiya of Chattogram.

The entire family is eating up Patiya and its surroundings area like an octopus. They run their control and extortion after dividing sectors.

Whip’s son Nazmul Haque Chowdhury Sharun is the prince of this dark kingdom. Whip’s two brothers – Nawab and Mohabbat -- and sister Rekha are the governors of the state. Neither the nephew nor close relatives remained out of the empire.

An investigation revealed such shocking information about the whip family.

On condition of anonymity, several Awami League leaders in Patiya alleged that no one from outside the whip family has the opportunity to do business in Patiya.

Members of the whip family do everything from tendering to providing sand, bricks and stones for development work, they said.

They are doing everything from controlling sand quarries to supplying raw materials and labour for factories, controlling the administration, taking unethical advantage in the name of so-called arbitration, the AL leaders said, adding that if anyone speaks out against the injustice, they are subjected to attack and lawsuit.

During investigation, it was found that after Shamsul Haque was elected MP for the second time in a row, his family started to expand their footprint in the crime world in Patiya. After he became the Jatiya Sansad whip, it took a serious shape.

Since then, whip’s son and his brothers and sister have got involved in all sectors, including tender manipulation, supply of rods, sand and stones, controlling sand quarries, supply of raw materials and workers for factories and drug trade.

To control of these businesses, murders have also happened. It was alleged that the whip family members were behind these incidents.

Sharun is the prince of the ‘Whip Empire’. He is accused of controlling tenders in the area, taking commission from big development projects, controlling juvenile gangs and nurturing other criminal gangs.

He is also in control of three big sand quarries in Indrapool, Militarypool and Vellapara areas of Patiya. The whip’s son is accused of occupying a private shipyard.

There is no end to the allegations against whip’s brother Fazlul Haque Chowdhury Mohabbat.

Mohabbat has been accused of occupying disputed land, taking unethical benefits in the name of arbitration and illegally influencing the police and upazila administration.

He is also leading the syndicate of selling topsoil of arable land in five unions of South Patiya. He collects Tk 4,000 per day from each truck carrying topsoil.

Another brother, Mujibul Haque Chowdhury Nawab, is in the role of 'Nawab' of the ‘Whip Empire’ in the true sense.

Once Nawab was at a distance from Shamsul Haque over various family issues. But forgetting the dispute in 2016, Nawab also joined the ‘Whip Empire’. From then, his reckless activities started.

Nawab controls the soil-filling syndicate in the area, supply of bricks, sand, cement, stones for development contractors and workers in various industrial factories in Patiya.

He is accused of forcing the industrial factories in Patiya to buy raw materials from him. The factory officials had to hire cars from him for carrying the workers.

At least five leaders and activists of Awami League and its affiliated bodies have been killed in the last five years over the control of these businesses. Nawab was blamed for these incidents.

Besides, Nawab has built a huge agricultural farm by occupying the land in Jangalkhain union of Patiya where he has invested crores of Taka.

Whip’s sister Rekha did not go less than her brothers. She is accused of occupying the land of minority communities, influencing negotiation at the police station and forcing various industries to take transport from her for carrying their workers.

Whip nephew Lokman Khan does not lag behind his uncles and aunty. He is accused of controlling tenders of upazila and municipal parishads, occupying land and controlling drug trade.