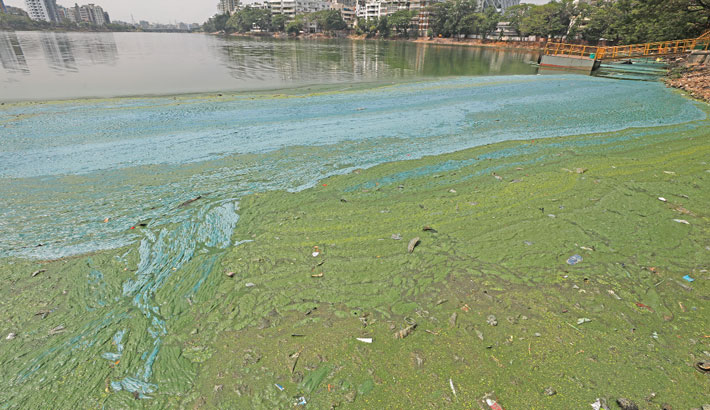 Waste in Hatirjheel Lake spreads bad smell, causing sufferings to the sightseers, pedestrians and the people living around the water body. The photo was taken from Gudaraghat point of the lake in the capital on Sunday. —Kamrul Islam Ratan

The polluted water of Hatirjheel Lake, a popular tourist spot in the capital, is spreading unbearable bad smell, causing sufferings to the sightseers, pedestrians and the people living around the lagoon.

It has been observed that layers of wastes are floating on the water of the lake, but none is there to look into the matter.

Amirul Islam, a resident of Gudaraghat area of Gulshan-1 said, “We smell bad odor from the water of the lake. It is very disturbing for us. The quality of water will improve, if authorities concerned take necessary steps for cleaning its water. But no steps have been taken so far.”

“We never thought that such a beautiful lake would turn into a polluted water-body in the capital.

We seek quick and permanent solution to the problem,” he demanded.

Sources said that Rajdhani Unnayan Kartripakkha (RAJUK) took a project involving Tk48.90 crore for purification of the water after getting its water tested from Japan and Australia.

Project Director of Hatirjheel Development Project and Chief Engineer of RAJUK ASM Raihanul Ferdous said that they have completed 90 percent work of the project and claimed that the lake water is not spreading bad odour.

He said, “We have observed that mosses have grown in the water. But there is no stinky smell in the water. We are spreading chemical as well as adopting aeration method to purify its water”.

He, however, said that sewerage lines of Kathalbagan, Green Road and Eskaton areas overflows into Hatirjheel Lake and Sonargaon hotel point may cause the smell.

“The water purification project will end in June this year. After completion of the project, we have to do maintenance work regularly. Otherwise, we cannot get rid of the problem completely,” he opined.