Spinners need to bowl in partnership 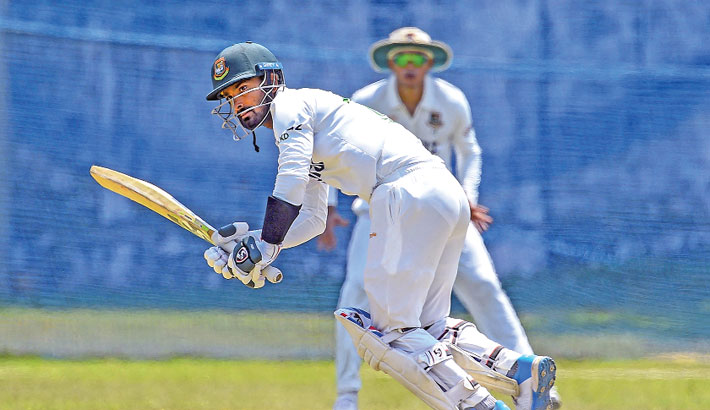 Bangladesh batsman Liton Das plays a shot during the second day Intra-Squad warm-up match ahead of their first Test against Sri Lanka at the Marians Cricket Club Ground in Katunayake on Sunday. — AFP PHOTO

All the Bangladeshi batsmen spent substantial time in the middle while off-spinner Mehidy Hasan grabbed three wickets as the tourists complete their two-day practice game at the CMC, Katunayke in Sri Lanka on Sunday.

Batsmen did well in the opening day of the practice match with all four top-order batsmen scoring a fifty each- Mushfiqur Rahim (66 retd out), Tamim Iqbal (63 retd out), Najmul Hossain (53 retd out) and Saif Hassan (52 retd out)- as  Bangladesh Red scored 314 runs in 79.2 overs at stumps on day one.

Wicketkeeper-batsman Nurul Hasan (48 retd out) and off-spinner Mehidy Hasan (24 not out) also played some handy knocks while Green’s Shuvagata Hom got the only success for them, removing Taijul Islam for two in the last ball of the day’s play.

Bangladesh had surprisingly opened the innings with Liton Das and called him back after he made 27 while he was again sent at number seven where he made 63.

The move to open the innings with Liton suggests that team management is seeing whether Nurul Hasan can be included as he is considered to be the best wicket-keeper of the country.

Team management will be relieved to see Mehidy picking 3-41 while Taijul grabbing 1-30 as the duo is expected to play a major role in Sri Lanka where the hosts are set to test the visitors in their spin-friendly conditions with the first Test slated to start on April 21 in Kandy.

The spinners had failed to bowl to consistent line and lengths in the past few Tests as they played while they lost the Chattogram Test at home to Windies after staying on top for four days.

It was said that there was not adequate help available for the spinners in Chattogram helped the visitors to grab the victory from the jaw of the hosts.

Spin has long been the Bangladesh team's main weapon over the years, especially in the game's longest format and they will have a job in hand as the hosts record against Sri Lanka has been disappointing- picking the only win in Bangladesh's 100th Test in 2017 in 20 Test matches so far while having lost 16 and drawn three so far.

Bangladesh will heavily rely on left-arm spinner Taijul Islam and off-spinners Mehidy Hasan along with Nayeem Hasan and Shuvagata Hom in the two-match Test series in the absence of their most experienced spinner in the form of Shakib Al Hasan.

If recent records are taken into account during the last Test in Palkelle in 2018 whereas English spinners Jack Leach, Moeen Ali and Adil Rashid were instrumental behind their 57-run win over the hosts and historically the wicket favoured spinners more than anything else.

Among a current lot of cricketers, Mehidy has been the most successful bowler for the Tigers in Sri Lanka, picking up ten wickets in two Tests although Bangladesh are yet to play a Test match in Pallekele, the likes of Taijul and Mehidy will definitely look to cash in on their experience in the upcoming Tests, both of which will be at the same venue.

“I am not sure whether it will be a spin wicket or not but what I understand is that both Taijul and Mehidy need to bowl in partnership to do well here,” Bangladesh team director Khaled Mahmud told The Daily Sun.

“Today (Sunday) Mehidy bowled really well and hopefully he will carry this confidence but we need to play with patience against the opponent and chances can only be created if we can bowl in partnership during the game,” he concluded.