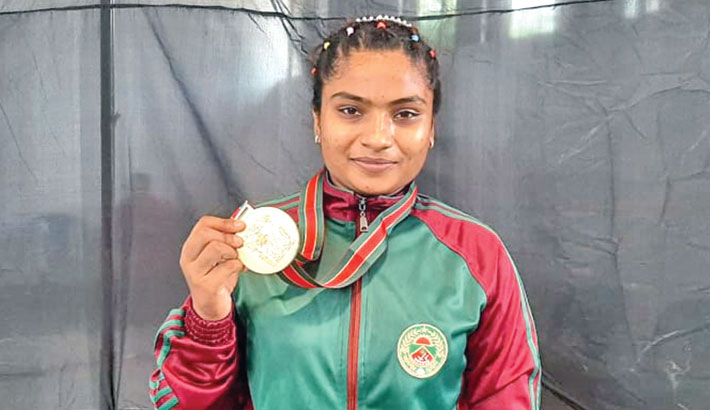 The Olympic dream of the country’s celebrated weightlifter Mabia Akter Simanta became doubtful after she failed to participate in the Asian Weightlifting Championship in Uzbekistan due to the countrywide lockdown and travel ban.

According to the IWF rules, a weightlifter must compete in at least one event in each of the three periods of six months (in this case from November 2018 to April 2020) and seven events overall along with showcasing continuous improvement in the performance to qualify for the upcoming Tokyo Olympic Games.

Mabia, who displayed consistent improvement in the last six senior-level competitions, had the opportunity to avail a wild card for the Tokyo Olympics by participating in the meet, scheduled to be held in Tashkent from April 16 to 25.

Mabia is scheduled to fly for Uzbekistan on April 19 while the country’s other two weightlifters Monira Kazi and Ziarul Islam are scheduled to leave on April 23 but the complete lockdown shattered their dreams to take part in the event.

“I was working hard to avail a wildcard chance for the Tokyo Olympics but travel restrictions put the chances into a risk. I want to see myself in the Olympics. That is my main goal. If I could take part in Uzbekistan, I would get a ticket to compete in the Tokyo Olympics,” Mabia told reporters on Saturday.

“It is an unexpected incident. We have talked with IWF and gave a clear picture of the country’s present situation. We also requested them to consider her (Mabia) consecutive participation in the previous six competitions,” he added.

“If the travel restriction ends on April 21, other two Monira and Ziarul may have a chance to participate. But Mabia can’t take part because her discipline will be held on April 20,” he added.

“Suchi and Kajal went there as referees. IWF invited them. The flight tickets were confirmed by IWF. The hosts and organisers decide when the participants and officials will fly. The flights were finalised before the lockdown,” said Nazrul.