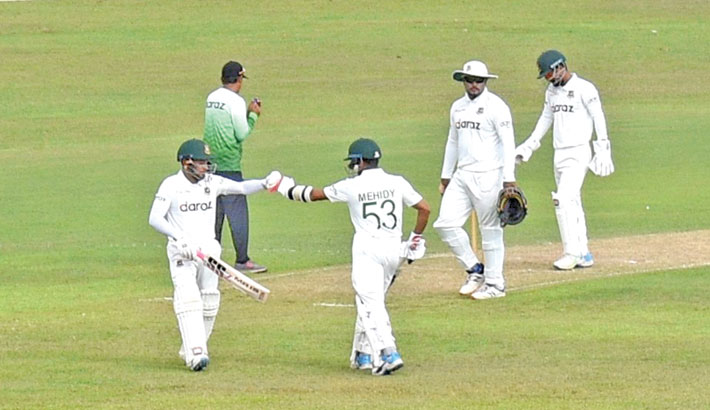 Off-spinner Mehidy Hasan (third right) congratulates Mushfiqur Rahim after scoring a half century during the first day of their two-day intra-squad practice match at the CMC in Katunayake on Saturday. — BCB PHOTO

Batsmen shone on the opening day of the two-day intra-squad practice match with all four top-order batsmen scoring a fifty each at the CMC, Katunayake on Saturday.

Mushfiqur Rahim (66 retd out), Tamim Iqbal (63 retd out), Najmul Hossain (53 retd out) and Saif Hassan (52 retd out) all made fifties as Bangladesh Red scored 314 runs in 79.2 overs against Bangladesh Green at stumps on day one.

Wicketkeeper-batsman Nurul Hasan (48 retd out) and off-spinner Mehidy Hasan (24 not out) also played some handy knocks while Green’s Shuvagata Hom got the only success for them, removing Taijul Islam for two in the last ball of the day’s play.

Bangladesh team management is eagerly looking to see how the cricketers perform in the intra-squad game considering they are yet to finalise the 16-member final squad for the two-match Test series.

If the opening day’s play is taken into account then certainly there will be major discussion in the dressing room on the performance of the bowling unit as they failed to make an impact in the game.

Pacers – Ebadat Hossain, Shoriful Islam, Shohidul Islam and Mukidul Islam bowled a total of 44 overs without a wicket while Shuvagata,  Nayeem Hasan and Mominul Haque shared 35.2 overs between them and leaked too many runs.

“There was something in the wicket during the first hour but apart from that, it was quite flat but despite everything we probably leaked out too many runs,” Bangladesh team leader Khaled Mahmud told The Daily Sun.

“This is an area we need to work out because the bowlers have to come up with a second plan of action if the wicket is not helping them too much,” he added.

Chief selector Minhajul Abedin echoed the same sentiment adding that he is impressed with the way the batsmen showed their temperament in the middle.

“It was tough to bat on for the first hour in these conditions but our openers Tamim (Iqbal), Saif (Hassan) had batted tremendously, as well as Shanto (Najmul Hossain) and Mushfiqur (Rahim). The bowlers also had bowled their heart and soul to get settled in,” he said.

Minhajul added that the bowlers need to take the lesson from the match as he is expecting the same kind of wicket in the Test series.

“I believe we can take a lot of feedback from this practice session which would ensure the best preparation for us in the Test series. They had the chance to get used to the condition, the weather as it is very important for the cricketers to get used-to to the wicket and the humid condition.

“The bowlers had a tough session as the wicket had a flat surface but the wicket had bounce. I’m expecting the same wicket in the Test series and so they need to take a lesson from it in the next practice game,” he added.

Red batsman Najmul expressed his satisfaction with the way everything turned out in the middle.

“It was a very good preparation before the Test matches as I had batted up to my plans today. I hope to have a good outcome in the Test matches if I’m able to replicate the same shape of batting,” said Najmul.

“We need to have patience in both our batting and bowling, which is the basic condition of playing a Test match as it would provide our chances to be successful. I think we need to consider session by session than the long-term plans, which would be easier for us,” he added.