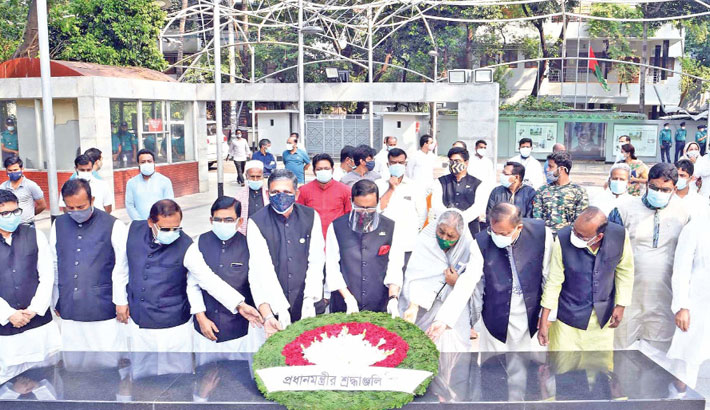 On behalf of Prime Minister Sheikh Hasina, Road Transport and Bridges Minister Obaidul Quader along with other senior Awami League leaders pays tributes to Bangabandhu Sheikh Mujibur Rahman by placing a wreath at his portrait on Bangabandhu Bhaban premises at Dhanmondi in the capital on Saturday, marking historic Mujibnagar Day. —SUN PHOTO

The ruling Awami League, its associate bodies, political and social organizations on Saturday paid tributes to Father of the Nation Bangabandhu Sheikh Mujibur Rahman on the occasion of the historic Mujibnagar Day, reports BSS.

Tributes were paid to Bangabandhu by placing wreaths at his portrait on Bangabandhu Bhaban premises at Dhanmondi Road 32 in the morning.

The programme was arranged on a limited scale by maintaining health guidelines in the wake of the second wave of coronavirus pandemic.

At first, on behalf of Prime Minister Sheikh Hasina, AL senior leaders paid tributes to Bangabandhu by placing wreaths at his portrait.

Later, on behalf of AL, party’s senior leaders led by its General Secretary and Road Transport and Bridges Minister Obaidul Quader placed a wreath at the portrait of Bangabandhu.