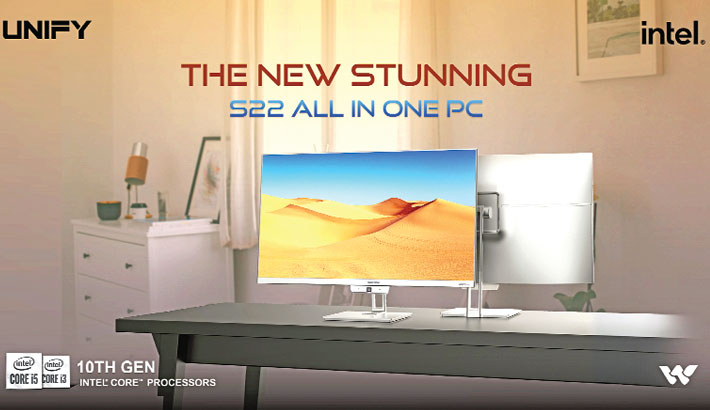 The PCs are equipped with eye-catching design and attractive features that will be available in the market from the end of March, said a press release.

Walton officials said that they have previously marketed several models of Unify Alpha22 series all-in-one PCs. The new series have been released in the market with updated and new features due to the wide response from the customers.

All-in-one PC is an ideal device for those who feel comfortable working in a certain place for long time. The devices can also be easily used as a means of any kind of work or entertainment at home.

The models in this series include Intel’s tenth generation Pentium Gold, Core i3 and Core i5 processors. All the variants have 8 GB 2666 MHz dual channel DDR4 RAM, which can be expanded up to 32 GB. All models have a 1TB hard drive as well as dual storage for 128GB SSD in the Pentium Gold and Core i3 variants and 256GB SSD in the Core i5 variant.

All models feature 21.5-inch anti-glare full HD display with an aspect ratio of 16:9.

The graphics unit has Intel UHD 630 graphics and Intel H410 chipset. In addition to the Ethernet port, there is built-in Wi-Fi for internet connectivity. Bluetooth is available for file sharing or wireless connectivity with advanced built-in speaker facilities. A special feature of the devices is the 2.0 megapixel camera, which is suitable for video-conferencing.

Rakib Bin Quader, product manager of Walton All-in-One computer said variants of all-in-one PCs are seen shortage in the market. We have developed various devices of the category with different prices and specification considering the needs of customers so that they can choose the right device according to their needs and budget.

The prices of Unify S22 series vary from Tk 43,950 to Tk 56,850 depending on models. Students can get a scholarship of up to Tk 1 lakh in purchasing of the device which is available along with other products in all Walton showrooms across the country.