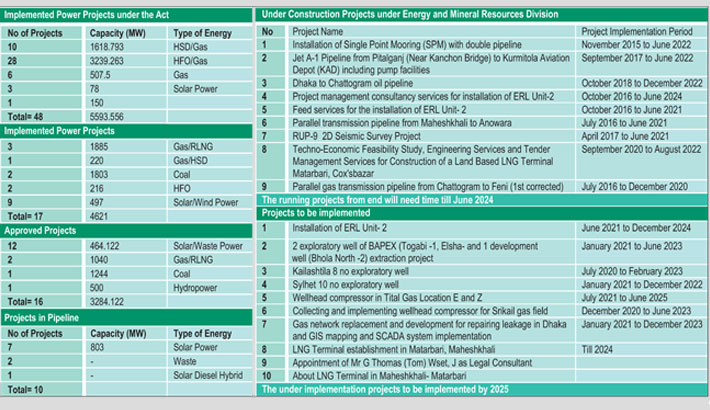 The government is likely to extend the implementation of the Speedy Supply of Power and Energy (Special Provision) Act 2010 for another four years.

Ministry of power, energy and mineral resources (MoPEMR) made a draft of four-year extension proposal till 2025, official sources confirmed.

“We have discussed the extension last month and hopeful to get a final outcome on it after lockdown,” an official concern said on the condition of anonymity.

The Speedy Supply of Power and Energy (Special Provision) Act 2010 will be expired on October, 2021.

Following the public procurement rules, it took around 16 months to set up power plant   including additional four months to float tender to evaluation and implementation of each project, the ministry justified. “The special power act 2010 will allow to implement such project within 6 to 12 months in private sector,” it said.

Under this law, power stations have been built speedily which helped to lessen the load shedding rate, it also said during the meeting. However, the energy experts in Bangladesh opposed the extension proposal.

According to them, such extension will encourage corruption as bidding to implement large infrastructural projects mostly in power and energy sector might be avoided.

Besides, Power Division is also implementing 17 projects having combined capacity to generate 4621MW of electricity.

The ministry of power and energy also allowed implementation of another 16 power projects having combined capacity to generate 3248MW of electricity under the unsolicited deals.  Besides, 10 other solar projects are pending under the deal.  On the other hand, the energy and mineral resources division (EMRD) is implementing nine mega projects in energy sector under the unsolicited deals taking advantage of the act.  Besides, it also plans to implement 10 other energy projects under the deal which will be completed by 2025.  The projects are: Installation of ERL Unit-2, Bapex two exploratory well (Tabgi-1 and Ilisha-1) and development well North-1, Sylhet no-10 exploratory well, Two wellhead compressor at Titas Gas Field, compressor at Srikail, gas network in Dhaka, appointment legal consultant for LNG and Moheskhali-Matarbari LPG terminal.

Bangladesh Petroleum Corporation (BPC) is planning to implement an unusual and questionable project ---Eastern Refinery Limited (ERL) unit-2—taking advantage of the act under unsolicited deal which might push the country into a debt burden. The proposed cost of the Eastern Refinery Limited (ERL) unit-2 project has surged by over Tk 3 billion in less than four months, according to a draft official document.  The Ministry of Power, Energy and Mineral is set to implement the four-year project to refine 3:00 million metric tonnes of crude oil at an estimated cost of Tk 175.33 billion from June 2021. According to the energy experts, the law was promulgated to implement projects in power and energy sector to meet the country’s power crisis.

As there is no such crisis in the sector, no more projects are needed to implement under the deal. “I don’t think it’s necessary to extend the Speedy Supply of Power and Energy (Special Provision) Act 2010 as Bangladesh has a surplus electricity generation now,” Prof M Tamim of Bangladesh University of Engineering and Technology (BUET) told the daily sun.  He said the government had enacted the law to handle the crisis time. Prof Izaj Hossain of BUET said the government would not need to extend the implementation of the law.

He, however, said the projects suffered from lack of proper management and planning. Prof M Shamsul Alam, energy adviser to Consumers Association of Bangladesh, said the government now faces electricity bill dues at as much as Tk 170 billion, which will increase further due to costly power projects under the unsolicited deals. “If the current situation will continue, the electricity tariff will surge gradually. Most of the power plants will remain unused because of high cost. Then we may need to import electricity,” he said. Prof Alam also said the government’s move to extend the law will hamper national and consumer’s interest. “And this will also encourage corruption,” he added.