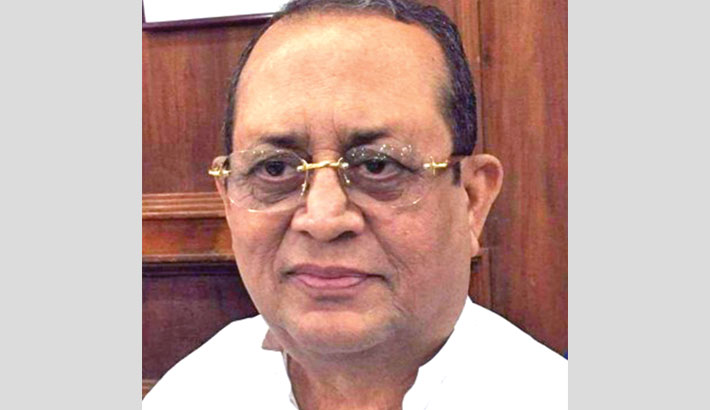 For over a week Hassan Shahariar Bhai was not keeping well. He wrote on facebook that he was not well. I called him several times but there was no response. I also called Rafiq, his driver (a constant companion) but in vain. Finally, Mainul provided some information that was alarming. Shahriar bhai was admitted to Impulse Hospital with Covid-19 syndrome. He was having respiratory problems for which he was taken first to Suhrawardy Hospital, given Oxygen in the doctor’s chamber as there were no beds vacant. From there he was shifted to Impulse Hospital marked for Covid treatment. All our hopes were shattered when I got the news that Shahriar Bhai had lost the battle and left for eternity on Saturday April 10, 2021.

Six months prior to that he was busy renovating his residence at Segunbagicha Eastern Housing Apartment Complex. When the renovation was done, he invited some friends including me for a house-warming party through an SMS on Saturday March 6, 2021. But on Friday, he sent us a message cancelling the event as he got admitted to Islami Bank Hospital at Kakrail with an upset stomach. “I put off the Saturday event in my house. Inshallah we will set a fresh date as and when I am released from the hospital,” he said in his last message. Not only that but he also wrote, “Please forgive me for upsetting your schedule.” He also sent the menu. But little did we know that it was not happening now or ever.

This was our Shahriar bhai, very courteous, gentle and soft-spoken. I knew him for more than four decades since his repatriation from Pakistan after Bangladesh came into being. Since then there was no going back. I had been a regular visitor to his house at Mahajanpur Lane in Old Dhaka and then at Malibagh. I used to travel to old Dhaka on my bike from Mohammadpur, located on the other end of the city. I had been to his old Dhaka house several times in the morning to have breakfast made of left-over rice from the previous night along with some special preparations. Imagine someone visiting some distance just to have breakfast with a friend, it is now unthinkable!

Shahriar Bhai was fond of parties and used to host lavish parties and I was almost a permanent guest. When not invited, he would explain why I was dropped. His logic was that, 'I invite different kinds of crowds and I decide who would fit into which party'. He would send an invitation through SMS and would expect a response. He used to invite people from different strata of life in his parties to avoid monotony. Shahriar bhai was a happy go lucky guy fond of parties, he would not only regularly host his friends-old and young but also attended parties. His amiable nature and ability to mix with younger friends made him a unique person. His presence added color to social parties. With his amiable nature, he drew people closer, a quality many of us cannot master in our lifetime. But Shahriar Bhai achieved this feat making him extraordinary.

I got to know him in the early seventies, when I joined the national news agency Bangladesh Sangbad Sangstha (BSS) as a junior sub-editor/reporter. He had repatriated from Karachi where he was stranded during the Liberation War. His father Maqbul Hossain Choudhury was the first Muslim editor of the then Assam province. He edited the Daily Sultan of Calcutta (now Kolkata) and the weekly Jugabani, Jugabheri and Sylhet Patrika from Sylhet. Following the footsteps of his illustrious father, Hassan Shahriar took up journalism as a career. He was Executive Editor of Daily Ittefaq, Chief Editor of Daily People’s View of Chittagong and correspondent of prestigious International magazine Newsweek and influential South Indian daily the Deccan Herald.

During my two-year stint in the Indian capital of New Delhi, Shahriar Bhai visited twice - once he made a stopover on his way to London and once for a medical checkup. On both occasions, he stayed at my Greater Kailash flat. During his second trip to Delhi, he hosted a party on my birthday (13th August) at the Foreign Correspondents' Club. Once I visited Dhaka from Delhi and had to stay at his place since my wife was not in Bangladesh. To my utter surprise, he shifted to a smaller room leaving his own bedroom for me, overruling my objection.

Born in a respectable Muslim family in greater Sylhet district of Sunamganj on April 25, 1946, Hassan Shahriar had an eventful life full of fun and glory. He was elected president of the National Press Club, President of Overseas Association of Bangladesh OCAB and South Asian Press Clubs Association (SAPCA). He was also elected as International President for two terms (2003-2012) of the most prestigious organisation of journalists called the Commonwealth Journalist Association (CJA). Both the time he was chosen without anyone else contesting. Later, he was elected International President Emeritus of the CJA in Malta in 2012. He was the first journalist from the Asia-Pacific region to hold the coveted post of President of CJA.

He started his journalism career in 1963 when he was appointed Sunamganj correspondent of the Daily Ittefaq. After going to Karachi for higher studies, Shahriar worked for a political weekly the Democrat without any remuneration. Later, he joined the daily Morning News, which was edited by Syed Mohsin Ali. When renowned journalist Altaf Hossain left the editorship of influential Dawn newspaper, Hassan Shahriar joined the paper as a reporter. He also worked briefly in the Evening Star, a sister concern of Dawn. He used to write regularly for the Illustrated Weekly of Pakistan and the Herald magazine. The Ittefaq management made him the West Pakistan correspondent of the newspaper. Before the national elections of 1970, Hassan Shahriar extensively travelled across West Pakistan and filed stories.

I came very close to Shahriar Bhai in the eighties. He was then correspondent of the Khaleej Times, an influential daily published from Dubai. Mahbub Jamal Zahedi, a Bengali journalist was initially its deputy editor and later became the editor. He was News Editor of Dawn when Hassan Shahriar used to work there as a reporter. I recall with pleasure that days before his two-week European tour, he met me at the National Press Club and asked me to work for the Khaleej Times in his absence. I agreed and thus began my association with foreign newspapers. I worked with him till he left the Khaleej Times. It was a wonderful experience.

He also worked as Bangladesh correspondent of the Indian Express from 1982 to 1993 and the Asian Age which was simultaneously published from Delhi, Mumbai, Kolkata and London. He has been associated with the international magazine the Newsweek since 1981.

I remember one incident which took place in India. A group of Bangladeshi journalists including Shahriar Bhai went to cover the Indian national polls. During the election campaign an unfortunate event happened--Rajiv Gandhi was killed, while campaigning. I was then attached to the PM’s office. The Prime Minister decided to attend Rajiv Gandhi’s funeral in Delhi. The decision was taken in the afternoon and we had no time to get dollar endorsement in our passports as we flew early morning the next day. From the airport, PM’s media team was directly taken to Shakti Sthall, where Rajiv was cremated. I met Shahriar Bhai there. It was extremely hot in Delhi. The city gave a deserted look with all shops being closed like curfew. We were thirsty but had no money to buy water from a vendor. Knowing our plight, he handed me and two other journalist friends a thousand-rupee-note each to meet our expenses. This was his love for his young colleagues.

Shahriar bhai hosted big parties on his birthdays on April 25 each year and we used to wait for the day. Last year it could not be arranged due to Covid-19, but some of his younger friends thought of arranging a small gathering this year if the situation so permitted. But, just two weeks ahead of his birthday, Hassan Shahriar left us for eternity. Personally, I have lost a friend and guide with his death.

Long ago, Zaglul Ahmed Chowdhury, a senior journalist and my colleague in BSS, who died in a road accident, had asked Hassan Shahriar to write his obituary if he died early. Hassan Shahriar kept his word. He wrote a heart-touching obituary on Zaglul Chowdhury. I also wrote a similar piece on Zaglul Chowdhury and now this one is for Hassan Shahriar. It is painful to write an obituary of a person who meant so much to me. I always shared my thoughts, problems and many other issues with him. He was a gem of a person and touched every soul that he met.

Rest in Peace Hassan Shahriar wherever you are. My only regret is that I could not talk to you before you left us for good.