Malitola Park a breathing space for people of Old Dhaka 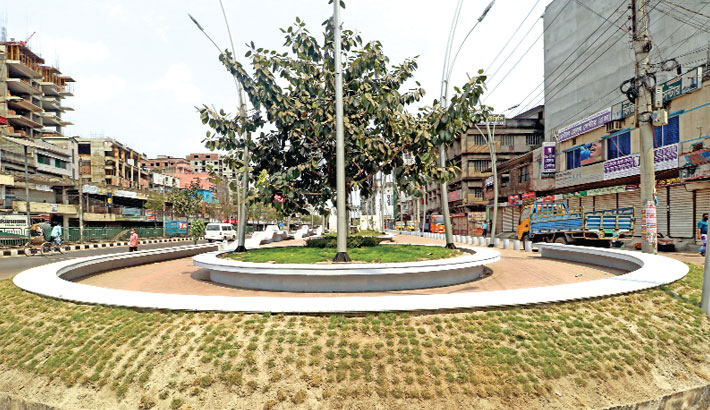 The Malitola Park in Old Dhaka in the capital wears a new look after it has been freed from the clutch of illegal occupants. The photo was taken on Friday. —Md Nasir Uddin

The roadside space between Old Dhaka's Raysaheb Bazar and Nayabazar intersection on English Road, which was once illegally occupied by truckers, makeshift shops and drug addicts, has turned into a breathing space for people of the area.

Pedestrians had to suffer a lot to pass the short distance due to parking of a large number of trucks along the footpaths and the presence of drug peddlers and criminals.

Now, the place has turned into a breathing space for the people of Old Dhaka after it was freed from illegal occupation. Dhaka South City Corporation (DSCC) has developed the space as a public park named Malitola Park.

Sources said that the DSCC had taken a plan to develop the 23.70 katha land as a park with modern facilities and started the development work back in September 2017.

On April 7 in 2021, DSCC Mayor Sheikh Fazle Noor Taposh opened the park for the public and the initiative is now drawing huge praise from the public.

DSCC officials said that it was supposed to open the park in 2019 but the development work delayed due to illegal grabbers.

During a recent visit to the area, this correspondent saw that the old face

of the place changed as truck stand and other illegal establishments were replaced by an eye-catching park with greenery.

In the park, there have a median with green grass and flower trees, a coffee house, walkway sitting benches, public plaza, mini secondary transfer station and other modern facilities for visitors.

The DSCC has kept a space for kids playing zone and ladies corner in the park and a circular walkway for doing physical exercise.

The park, meanwhile, has drawn attention of people of Old Dhaka as netizens are seen sharing the photographs of the park on facebook and praising the initiative of DSCC.

Hasibul Hasan Hriody, a student of Jagannath University and a resident of the area, said, "We could not walk on Chitra Cinema Hall road because of illegal truck stand and a large number of makeshift shops. It was a hub of anti-social activities.”

"But our hassle is over as the area is now a fascinating place for us. Visitors can enjoy the beauty of the park and take breathe after a busy daytime as the whole park has been illuminated with lights,” he also said.

Talking to the Daily Sun, DSCC Executive Engineer (Civil) Munshi Md Abul Hashem said that park was developed under “Jol Shobuje Dhaka” project under which 19 parks and 12 playgrounds were developed.

DSCC zone-4 Assistant Engineer Mohammad Luthfar Rahman said, “All modern facilities were added to the park. There is a smart drainage system for extraction of water. I hope it can entertain people.”

He also said the DSCC has spent Tk 39.6 million for turning the open space into an aesthetic park for the people of Old Dhaka.