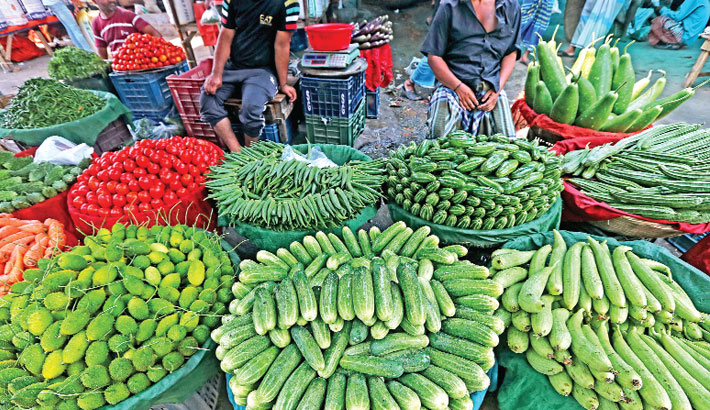 A seller displays varieties of vegetables at his shop in Karwan Bazar in the capital on Friday. Prices of the essential kitchen items shot up following the lockdown across the country. – SUN PHOTO

Prices of vegetables and chicken have skyrocketed in kitchen markets in the capital amid the ongoing weeklong nationwide strict lockdown.

The city markets have witnessed the gradual price hike during the last couple of months but the recent hike created concern among the low and fixed-income people.

Most of the vegetables were selling at higher prices as supply of the produces has shrunk due to the government restriction over Covid-19 outbreak.

On Friday, the third day of Ramadan, during a visit to several kitchen markets in the capital, it was found that the prices of eggplant, cucumber, tomato and lemon have almost doubled compared to the last week.

In the capital’s Karwan Bazar, eggplants were selling at Tk80-110 while per kg eggplant was sold at Tk50 in the last week.

Sellers at Karwan Bazar blamed inadequate supply amid the lockdown for soaring price of vegetables in the markets.

Sadekuzzaman, who sells vegetables at Karwan Bazar, said, “This high price of vegetables is the result of scanty supply. Vegetable-laden vehicles could not arrive at the market due to the lockdown and consequently the prices soared.”

Mahbub Hossain, a buyer at Thatari Bazaar, said, “Our income has reduced to a great extent during the pandemic. It is hard to afford fishes and meats every day. In such situation, we could depend on vegetables but high price of veggies is making our life difficult.”

“The sellers are using the excuse of lockdown to increase the prices. Actually they are habituated to harass the commoners during every Ramadan,” he added.

Small vegetable vendors in different markets have said that they either have stopped selling eggplant or selling in minimal amount.

Milan Mia, a small vegetable seller at Rampura Bazar, said the way the price of eggplant is increasing it may cross Tk150 anytime, yet a section of buyers are purchasing it in high price.

“A few buyers are taking eggplant but most purchasers are losing interest after hearing the price. I bought only 10 kg of eggplant as I knew that eggplant wouldn’t be sold in large amount due to high price,” he said.