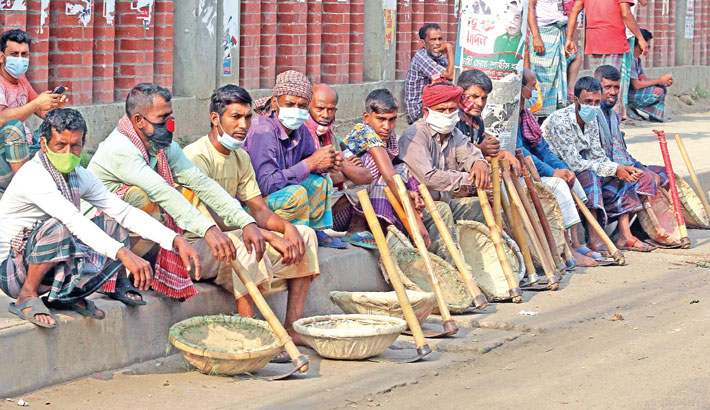 Day labourers squatting on a footpath with their hoes look pensive as they are yet to get any work amid the ongoing lockdown. The photo was taken from Azimpur area of the capital on Friday. – Md nasir uddin

Daily wage earners and low-income groups are facing severe hardship due to income loss during the strict lockdown being enforced across the country.

Ariful Islam, who runs a street food shop near Japan Garden City in city's Mohammadpur, said the lockdown measures have abruptly halted his business in which he used to earn around Tk 800 per day.

“I have sent my two sons, one daughter and my wife to my village as I don’t have any income to run my family. I spent all of my savings last year during the Covid-19 crisis,” he said.

“No one knows when the situation will become normal again.”

Ohidul, a street vendor, told the Daily Sun that he can’t sell chicken due to strict lockdown imposed in the city.

Last few days he was able to sell some chickens but after Wednesday, he could not run his business as most of the areas in the city have been following stick lockdown measures.

Locker mechanic Faruk Munshi said he is struggling to provide for his four-member family as he is hardly making any money during the lockdown.

He said he learned the work from his uncle Abu Bakkar, who left Dhaka city last year when the corona pandemic started.

Not only the informal workers in the urban areas but also daily wage labourers living in rural areas are also facing hardship due to income loss.

“They have spent all of their savings last year. Now they have no money left to make ends meet,” he said, adding that the government should help them during the lockdown period.

The country's poverty rate increased by 7.0 percentage points to 30 per cent in the last fiscal year than that of a non-Covid-19 counterfactual scenario, said a World Bank (WB) released on Monday.

In a survey, the Washington based-lender found that one in five economically active individuals had experienced either a job loss (5.0 per cent) or a prolonged absence from work (14 per cent) since the onset of the Covid-19 crisis.

“Among the latter, the average duration of unemployment was three months. Of them, 51 per cent reported a loss in earnings or wages,” the WB said.

According to the Bangladesh Development Update (BDU), some 56 per cent of those who did not own their dwelling are reported unable to pay their rent in full in the month preceding the interview (Sept. to Nov. 2020).

The WB conducted the nationwide phone-based survey from September to November 2020 and documented substantial labour market impacts of the pandemic, including widespread losses in labour earnings and poverty.