Streak: the culprit behind Shakib’s ban! 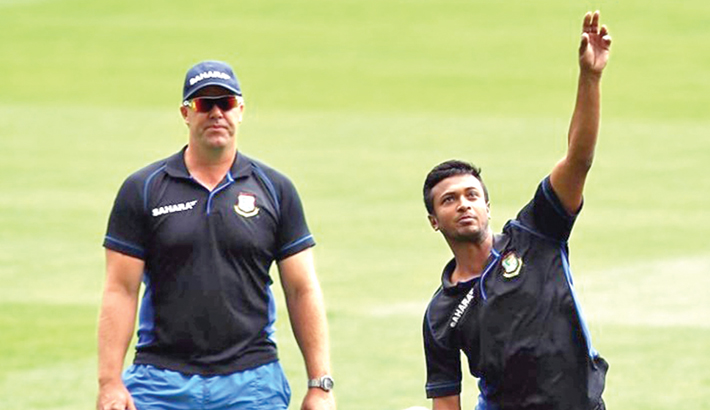 The 47-year-old accepted all five charges labelled against him for his role as the coach of Zimbabwe between 2016-2018 and as the coach of various franchises, including for the Kolkata Knight Riders during IPL 2018 and the Kabul Zwanan during APL 2018.

Since Streak’s getting ban by ICC, there is a buzz going around Bangladesh’s cricket fraternity that the former Zimbabwean skipper gave the number of their ace all-rounder Shakib Al Hasan to Deepak Agarwal and as things are unfolding it looks all but certain.

On October 29, 2019, Bangladesh captain Shakib was banned by the ICC for two years, with one year suspended, for failing to report corrupt approaches made to him by a bookie, later revealed as Agarwal.

Throughout many interrogations with Shakib, ICC found out that Shakib was aware that his telephone number had been provided to Agarwal by another person who was known to him during the Bangladesh Premier League in November 2017.

ICC’s investigation report on Streak eventually established that the person close to Shakib was none other than the former Zimbabwean skipper whom Agarwal met earlier.

Agarwal decided to buy Streak by proposing that he could get good money if he gave him the contact numbers of BPL franchise owners and cricketers of Bangladesh team.

At that point of time, 2017 to be precise, Streak started to get associated with Agarwal and in the process gave the number of Shakib, who was playing for Dhaka Dynamites. The relation of Streak and Bangladesh cricket goes a long way as he was a regular feature in Bangladesh domestic cricket but his association with the current crop of cricketers grew stronger during his tenure as bowling coach from 2014-2016.

The Daily Sun understood that Streak provided Agarwal the numbers of Shakib along with another leading cricketer of the country but the other cricketer in question immediately reported the approach made by the bookie to ICC ACU, though Shakib failed to do so.

When a top Bangladesh Cricket Board official was contacted, he feared that they were also suspecting Streak for providing the number of Shakib to Agarwal.

“After seeing all these (bans on Shakib and Heath Streak) certainly we feel there is a possibility that he (Streak) had given Shakib’s number to Agarwal,” said the official, requesting anonymity.

According to ICC investigation, In January 2018, Shakib participated in an ODI tri-series involving Bangladesh, Sri Lanka and Zimbabwe and during this series, he and Agarwal exchanged further WhatsApp conversations.

On January 19, 2018, Shakib received a WhatsApp message from Agarwal who congratulated him for being named man of the match in that day's game.

Agarwal followed this message with one saying, "Do we work in this or I wait till the IPL". It is understood that Agarwal was asking for inside information from Shakib that he didn’t provide.

The ICC statement issued on Wednesday suggested that Streak was charged for disclosing inside information that may be used for betting purposes during matches in the 2018 Tri-Series involving Zimbabwe, Bangladesh and Sri Lanka.

On April 26, 2018, Shakib played in the IPL game between Sunrisers Hyderabad and Kings XI Punjab. He received a WhatsApp message from Agarwal that day asking him whether a particular player was going to be playing in the game that day, i.e. again asking for inside information and Agarwal continued this conversation with him by talking about bitcoins, dollar accounts and asked Shakib for his dollar account details. During this conversation, Shakib told Agarwal that he wanted to meet him "first".

It is to be noted that Agarwal followed crypto-currency as a mode of payment for both Streak and Shakib that the all-rounder didn’t accept before meeting him in person.

Streak was found guilty of "failing to disclose the receipt of any gift, payment, hospitality or other benefits" which included 2 bitcoins (subsequently converted into USD 35,000 in cash) and a new iPhone for his wife from Mr X, who is none other than Agarwal.