Roshan and Tama play lead roles in the web film 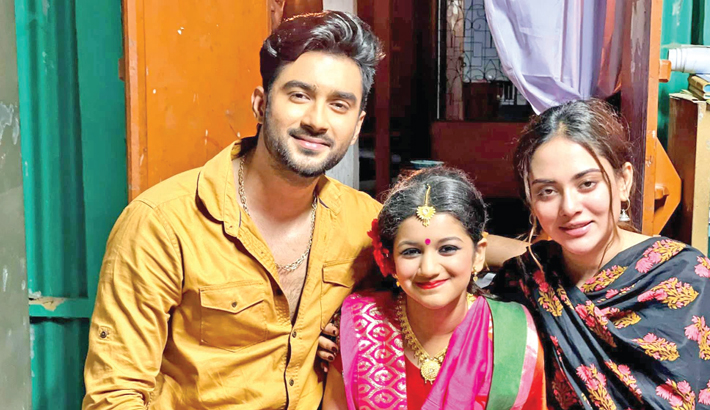 The last day’s shooting was held at Keraniganj upazila of Dhaka on Tuesday. Earlier, the first lot shooting ended at Daulatdia in Rajbari on March 20.

The story of the film revolves around a girl who manages to escape from a brothel of Daulatdia. After fleeing from brothel, the girl takes shelter in a nearby school. Later, the members of her family as well as sex workers of the brothel went to know that the girl is in the school, and then they insist her to go to brothel again. Thus the story of the film continues..

About the film, director Mahmud Hasan Sikder said, “The story of the film based on a real story. There many girls who have went to the brother because of child trafficking. They live in brothel against their will. I have tried to portray this side of prostitute girl in the film.”

“Roshan, Tama, and other artistes of the film have tried their level best to portray themselves according to their characters.  I hope it will be a good web film”, he added.

Roshan said, “The story of the film is about child trafficking. I’m playing the role a local leader in the movie. The makers have made the film with utmost care. I hope the audience will enjoy the film very much.”

Tama Mirza said, “The story of the webfilm ‘Anandi’ is amasing and my character in film is very challenging.  I’m very hopeful about the film.”