The silent victims of the pandemic 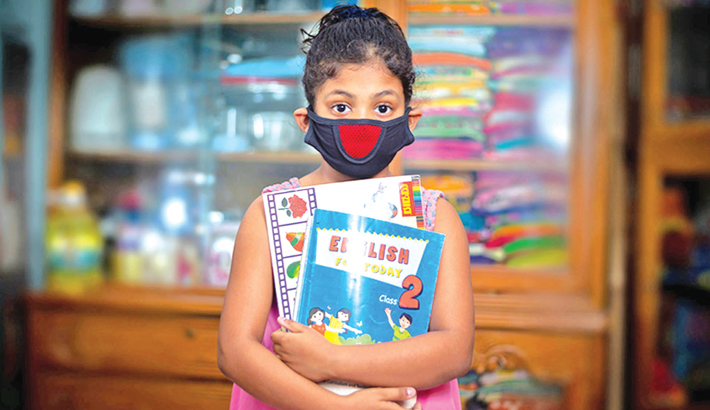 Wearing a protective face mask against transmissible Covid-19 diseases, a girl stays at her home due to the ongoing closure of all schools. — Internet photo

With schools shut down due to the Covid-19 pandemic, most children are now confined to their homes. But many of them are still the victims of the virus, as they are spending maximum time in front of screens these days -- be it mobile phones, laptops or TV, say experts.

According to the experts, children and their gadgets are inseparable today, and this could be dangerous for their mental and physical health. Add to this: prolonged isolation due to lockdown-related restrictions that are forcing them to stay indoors. And the urban children are the most affected, reports UNB.

In Bangladesh, the government ordered the closure of all educational institutions on March 17 last year after the country confirmed its first Covid-19 cases on March 8. The closure has been extended several times in the past one year, most recently this month, to protect the students from the virus.

As education boards across the country could not hold exams, all the students were promoted, based on the evaluation of their previous test results.

But parents claim their stay-at-home wards have become addicted to gadgets over the past one year, keeping in touch with their friends on social media platforms like Facebook and WhatsApp, studying and playing games on laptops or computers, or connecting with acquaintances on mobile phones -- all at the cost of their health.

"My two children study at Najirabazar Government Primary School. Since the closure of their school, they have been confined to their home only. All the time, they remain glued to their mobile phones after remote studies. Pre-Covid, they would never miss their outdoor games at the local playground," Farjana Ferdouisi, a resident of old Dhaka, told UNB.

The overuse of gadgets, Farjana said, seemed to be taking a toll on the health of her children. "Gadgets and social media platforms like Facebook and WhatsApp are keeping both my children awake too late. We never got the opportunity to use gadgets in our childhood, probably that's the reason why we are still fit and fine," she added.

According to the latest National Adolescent Health and Wellbeing Survey, more than 90 percent adolescents use mobile phones in Bangladesh.

According to Dr SM Aman of the London School of Hygiene and Tropical Medicine in the UK, research suggests that prolonged cell phone exposure could affect children's behavior. "The children in the study who were hyperactive or had emotional or behavioral problems, including trouble getting along with other kids, were much more likely to have mothers who used cell phones during pregnancy," he said.

"Children use cell phones to watch TV, play games, make phone calls and send text messages. Many older kids and teens have their own cell phones, which they are attached to 24/7 hours. But are there risks to such frequent use by children, and if so is that different than the risks for adults," he asked.

The alumnus of Rajshahi Medical College said cell phones emit microwave radiation. "There have been concerns from the scientific community about whether or not cell phones are safe. Cancer is a particular concern, but since cancers take 10-20 years to develop and children's frequent cell phone use is a relatively recent development, there are more questions than answers," he added.

Rahima Akter, a lecturer at the World University of Bangladesh, said adolescents use devices especially mobile phones at least six or seven hours daily while at home. "Overusing the gadgets creates pressure on the brain that raises mental and physical health risks. So, adolescents should play games in playground instead."

Other experts urged parents to step in and use the opportunity to enhance family bonding with their children.