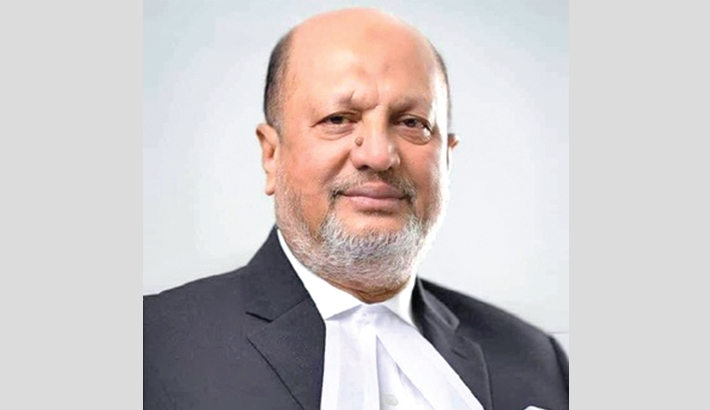 Former Law Minister Abdul Matin Khasru, also president of Supreme Court Bar Association (SCBA), was laid to eternal rest beside his parents at their family graveyard in his village at Brahamanpara upazila in Cumilla district on Thursday.

Matin Khasru was also a ruling party lawmaker from Cumilla-5 constituency and a member of Awami League Presidium.

Earlier, after his first janaza on Alia Madrasha premises at Bakshibazar, second janaza was held at Supreme Court premises in the capital.

After the janaza, state guard of honour was also paid to the valiant freedom fighter Khasru on behalf of the Dhaka district administration. People of all strata paid respect to him during this time.

On April 14, Khasru died at the age of 71 while undergoing treatment at the Combined Military Hospital, in Dhaka where he had been receiving corona treatment since March 16.

Earlier, he was moved to a cabin on March 31 when his condition had improved. On April 1, his Covid-19 test result came negative but suddenly his physical condition deteriorated.  He left behind wife, a son, a daughter, a host of relatives and well wishers to mourn his death.

Dignitaries from various organisations expressed their condolences for the seasoned politician.

In his condolence message, President Abdul Hamid said the nation will always remember Matin Khasru’s contribution to the abolishment of the Indemnity Ordinance paving the way for the trial of the killers of Father of the Nation Bangabandhu Sheikh Mujibur Rahman.

In a condolence message, Prime Minister Sheikh Hasina said Khasru as a learned lawyer and leader of mass people will live forever in the heart of the people.

“He contributed significantly in the ascension of the country’s law and judicial system,” she said.

Due to sad demise of the noted lawyer, the judicial activities at the apex court have been postponed. Khasru was elected president of Supreme Court Lawyers Association on March 13. Khasru became top national leader in the politics from the grass root level.

Khasru had been elected parliament members for five times from Cumilla-5 (Burichang-Brahmanpara) constituency and he was the member of parliament of the seat till his death.

Khasru started his law profession at Cumilla Judge Court in 1978. He had been practicing regularly at Bangladesh Supreme Court since 1982 and it continued till his death. He became law minister of the Awami League-led government during 1996 to 2001 period. He was a law secretary of the Awami League for long time.