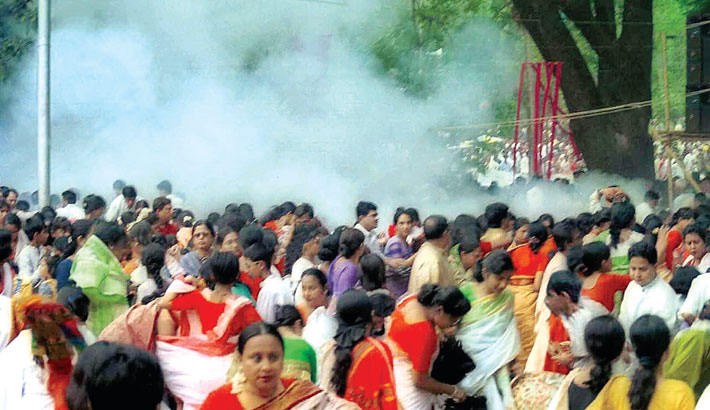 Though twenty years have already elapsed since the horrendous bomb attack on Pahela Baishakh in the city’s Ramna Batamul, the nation as well as the family members of the victims is still waiting impatiently for the attackers to receive punishment for the gruesome incident which left 10 people dead and 50 others hurt.

The deadly bomb attack took place on April 14, 2001 during a cultural programme of Chhayanaut marking the Bengali New Year 1408.

Two cases -- one under Penal Code for murder and the other under the Explosive Substances Act -- were filed at Ramna Police Station over the incident. The trial under Penal Code has been pending with the High Court for the last seven years while the trial in other case is pending with a Dhaka speedy trial tribunal due to slow trial proceedings and non-appearance of witnesses.

According to the cases, Criminal Investigation Department (CID) of police found that militant outfit Harkat-ul-Jihad al-Islami (HuJi) was complicit in the attack. The department pressed charges in both cases against 14 militants, including HuJi chief Mufti Hannan, on November 30, 2008. Two accused -- Mufti Hannan and Akbar -- admitted carrying out the grisly attack on Pahela Baishakh.

Thirteen years after the attack, a Dhaka court on June 23, 2014 sentenced eight militants, including Mufti Hannan, to death and six others to life imprisonment in the murder case.

Of the accused, Mufti Hannan was executed in 2017 in another case and five convicts -- Sumon, Jewel, Abu Taher, Rauf and Akbar -- are behind bars while others are still on the run.

The case documents and judgment reach the High Court as death references seven days after the lower court delivered the verdict.

High Court sources said eight of the condemned men filed separate appeals with the HC challenging the trial court verdict. The hearing in the case started on January 17, 2017 at a bench of the HC, but it was dropped from the cause-list due to reformation of the bench later.

Now, the case is waiting for the death reference hearing in a HC bench comprising Justice Krishna Debnath and Justice ASM Abdul Mobin.