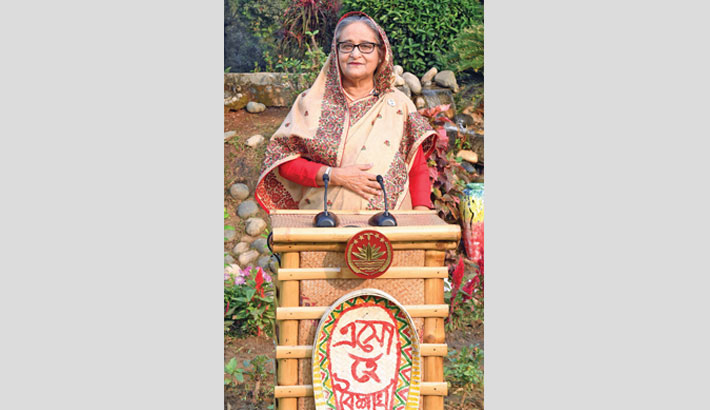 Prime Minister Sheikh Hasina on Tuesday addresses the nation greeting the people on the eve of the Bengali New Year 1428. She also advises them to strictly follow the health guidelines amid the worsening coronavirus situation in the country. – PMO PHOTO

Prime Minister Sheikh Hasina on Tuesday urged everyone to follow health guidelines and celebrate Pahela Boishakh at home when the nation enters a strict weeklong lockdown to contain the upsurge of coronavirus transmission.

“We have to remember that the lives of the people come first. If (we) survive, we’ll be able to rearrange everything,” she said while addressing the nation on the eve of Bengali New Year, Pahela Boishakh.

She also urged the countrymen not to be panicked at the second wave of covid-19 and assured that her government is always with them. She asked authorities concerned to take measures to provide necessary assistance to the poor and low-income people.

In her roughly 13-minute speech, the Prime Minister said that the government has imposed some restrictions on the movement of people due to the second wave of coronavirus last week.

She said the rise in cases compelled the government to take some tough measures following the advice of public health experts.

The prime minister acknowledged that the strict measures could cause some issues for the livelihoods of many people. She reminded everyone that protecting the people’s lives was the top priority.

Sheikh Hasina mentioned that last year everyone had to face various types of adverse situations after coronavirus hit. “As quarantine is one of the ways to resist this pandemic, for that we’ve to take some steps that had an impact on people’s lives and livelihoods,” she said.

She said that last year the government imposed 62 days of general holiday. It is yet to open educational institutions. The Prime Minister said the situation was not unique to Bangladesh. “Such steps are being taken wherever the impact of this deadly virus is intensifying,” she said.

Along with saving people’s lives, the Prime Minister said the government is keeping watch so that country’s economy, lives and livelihoods of the people do not fall apart.

“With cooperation from all we have taken some steps, as a result, last year we were able to face the coronavirus pandemic successfully,” she said.

She said the government fixed four key activities last year to face the possible adverse impact of coronavirus. They were—increasing public expenditure prioritising employment generation; formulating stimulus package for reviving economic activities, keeping labours and workers in their jobs and keeping the competitiveness of the entrepreneurs.

The other two are— expanding social safety net programmes for fulfilling the basic needs of people living under the poverty line, non-institutionally engaged and day labourers, and increasing money supply to overcome the adverse impact on the economy in a way there will be no inflation.

“Our activities are continuing based on these four principles. We’ve already announced 23 stimulus packages of Tk 1,24,053 crore,” she said.

She also said that some 2.5 crore people have been brought under various government assistance programme apart from taking steps for uninterrupted production in mills and factories and increasing agricultural production.

“There’s no need to be worried, the government is always beside you. I’ve taken steps for the poor and lower-income group after the second wave hit,” she said.

In this regard, she said that the government allocated Tk 807.65 crore for employment generation in the rural areas and more than Tk 672 crore for Holy Ramadan and Eid-ul-Fitr. This will benefit 1,24,42,000 lower income group families.

Talking about the vaccine of coronavirus, Sheikh Hasina said that scientists have already invented some vaccines, Oxford-AstraZeneca is one of them.

She also said that it was a matter of good luck that Bangladesh has been able to bring a sizeable number of doses at the beginning of the vaccine production.