Another exodus from capital 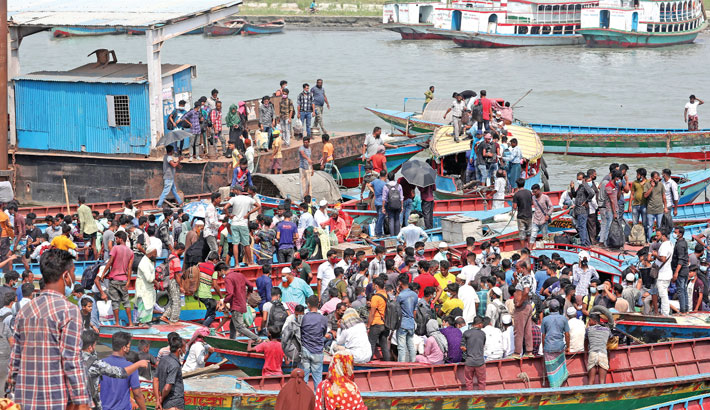 Homebound people cram in fishing trawlers at Shimulia ghat for going to their village homes on Tuesday, just a day before the country goes into complete lockdown. – Reaz Ahmed Sumon

People on Tuesday left the capital for village homes in their thousands by alternative means amid the suspension of public transport services, a day before the countrywide complete lockdown beginning today.

Long tailbacks were created on major highways and ferry terminals due to the heavy pressure of vehicles amid the huge rush of homebound people.

Bangladesh went into an eight-day complete lockdown today in an effort to curb the spread of the coronavirus.

Government, semi-government, autonomous and private offices remained closed while operations of all modes of communications suspended.

People are not allowed to go outside without any emergency need.

Only emergency services are allowed to operate during the stricter shutdown.

A large number of people were seen leaving the capital by small vehicles like private cars, microbuses, pickups, CNG-run auto-rickshaws and motorcycles. Trucks were also found carrying the home-goers.

Passengers had to pay additional fare for travelling by alternative vehicles.

All the vehicles were overcrowded as no one paid any heed to social distancing.

Over 1,700 vehicles got stranded at Shimulia-Banglabazar ferry terminal since the morning.

Around 1,000 vehicles at the Shimulia side and over 700 others at the Banglabazar side were waiting to cross the Padma River, said Shafayet Ahmed, BIWTC manager at the Shimulia ghat.

As many as 14 ferries out of 16 were transporting vehicles on the route, but they had not been able to bring the situation under control due to the heavy pressure of vehicles, he said.

“Launch services are not available on the Shimulia-Banglabazar route. More than 450 speedboats and several hundred trawlers are also transporting passengers in a crowded condition,” Shafayet said.

Severe tailbacks were also created at Aricha-Kazirhat ferry ghat of the Jamuna River as a large number of people working in different northern districts were trying to return to their homes.

Aricha-Kazirhat ferry ghat is mostly used for movement of goods-laden trucks but a lot of vehicles, especially private cars and microbuses with homebound passengers, were seen stranded on both sides -- Aricha and Kazirhat, police said.  Besides, thousands of people were returning home by many engine-run boats and speedboats through river routes.

In the capital, residents witnessed traffic congestions on different roads as a huge number of motorised vehicles hit the streets.

Health rules were hardly maintained at kitchen markets as people were seen moving without wearing masks and maintaining social distancing.