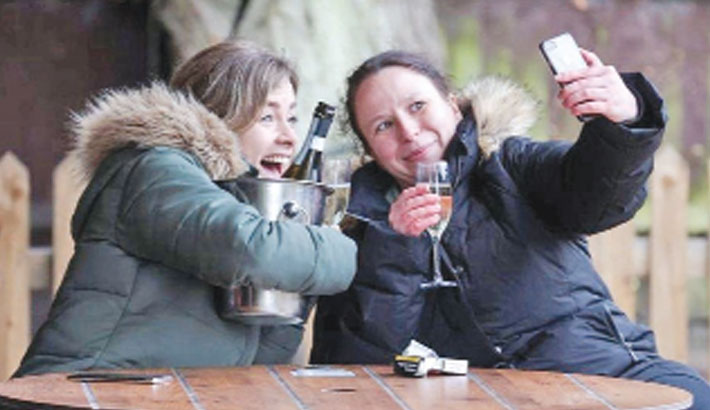 For the first time in months, pub gardens, shops and hairdressers are reopening in England, as rules are also eased in the rest of the UK.

Some pubs and salons opened at midnight, with one landlord saying there was a “sense of celebration”, and shoppers queued outside Primark stores, reports BBC.

Prime Minister Boris Johnson has urged everyone to “behave responsibly”.

Northern Ireland’s “stay-at-home” order is ending and some rules are also being relaxed in Scotland and Wales. The PM had planned to have a celebratory pint to mark the measures easing,

but that has been postponed following the death of the Duke of Edinburgh on Friday.

Snow showers and chilly temperatures in parts of southern England appeared to do little to dampen enthusiasm for outdoor pints or early-morning queuing for shops and salons.

Nicholas Hair, landlord and owner of the Kentish Belle pub in Bexleyheath, south-east London, said there was a “sense of celebration” in the early hours of Monday as it opened to midnight customers.

“I’m hoping that this is a sort of rebirth, and that we are reopen for the foreseeable,” he said. In Coventry, hundreds of people queued outside the Oak Inn for its midnight opening. Owner Darren Lee said they served 260 customers, but turned 300 to 400 people away.

Kelly Boad, owner of the Hair & Beauty Gallery in Warwick, opened her salon at midnight for a symbolic “first cut” of 2021, adding she is fully booked for the first few weeks.

Another business that reopened at midnight in England was Secret Spa, which offers at-home salon and spa treatments in London, Manchester and Brighton.

Co-owner Emily Ewart-Perks said it had “been such a long time coming”, saying: “Everyone has really missed the social contact of the day-to-day job and making clients happy.”

She said they have experienced a “surge of bookings”, including “a lot of 6am haircuts”.

Shoppers rushed back to the High Street, as queues formed outside branches of Primark, JD Sports and TK Maxx and retailers extended their opening hours.But the British Beer and Pub Association has estimated that only 40% of licensed premises have the space to reopen for outdoor service.In Northern Ireland, the remaining school year groups 8-11 will return to the classroom. The stay-at-home message is being relaxed and up to 10 people from two households can meet in a private garden.

In Scotland, pupils at schools in six council areas went back to school today. Not everyone returned on Monday because differing term times mean some schools are still closed for the Easter holidays.

After a drop in Covid cases prompted the Welsh Government to bring forward some dates for reopening, all students returned to face-to-face teaching on Monday.

Non-essential shops can also reopen, close-contact services can resume, driving lessons can restart and travel in and out of Wales from the rest of the UK is allowed.

In a statement, the prime minister said the rule relaxations are “a major step forward in our roadmap to freedom”.

“I’m sure it will be a huge relief for those business owners who have been closed for so long, and for everyone else it’s a chance to get back to doing some of the things we love and have missed,” he added.

“I urge everyone to continue to behave responsibly and remember ‘hands, face, space and fresh air’ to suppress Covid as we push on with our vaccination programme.”

The rule changes in England marks the third easing since the country’s third national lockdown began on 6 January.

There is a gap of at least five weeks between each step on the government’s “roadmap” out of lockdown, to allow the impact of changes on infection rates and hospital admissions to be assessed.

The next significant date is 17 May, when up to six people from different households could be allowed to socialise indoors.

More than 32 million people in the UK have now had their first dose of a coronavirus vaccine and of those 7.4m have had their second dose.

Mr Johnson praised the “record-breaking day” on Twitter, writing: “Thanks to everyone involved in this extraordinary effort which has already saved thousands of lives.”

The number of people dying in the UK within 28 days of a positive Covid test continues to fall steadily, with seven further deaths reported on Sunday.

That is the lowest daily death toll by this measure since 14 September 2020. However, there can be a lag in reporting coronavirus statistics during weekends.