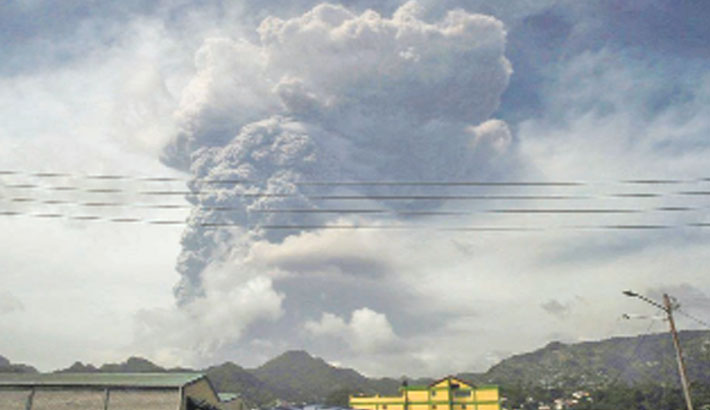 The Caribbean island of St Vincent is likely to see further volcanic eruptions and ash fall over the coming days, experts have warned, reports BBC.

The La Soufrière volcano first erupted on Friday, blanketing the island in a layer of ash and forcing more than 16,000 people to evacuate their homes.

Smaller explosions continued over the weekend, causing power cuts and disrupting water supplies. Emergency officials have described the landscape as a “battle zone”. “The volcano continues to erupt explosively with the production of copious amounts of ash,”

the University of the West Indies’ Seismic Research Center said. “Explosions and accompanying ash fall, of similar or larger magnitude, are likely to continue to occur over the next few days impacting St Vincent and neighbouring islands,” it warned.

June Shipley, who is visiting her family on the island, told the BBC there were widespread fears a larger eruption could be imminent.

“We do hear the rumblings of the volcano and we do see the smoke,” she said.

White-coloured dust has covered buildings and roads around the island, including in its capital Kingstown.

The warning to expect further activity at La Soufrière followed what officials described as an “explosive event” on Sunday.

It later spoke of “possible destruction and devastation of communities close to the volcano”, and compared the eruption to that of 1902, the worst in St Vincent’s history when more than 1,000 people were killed.

Rhiannon West, who is originally from England, lives in the south-east of St Vincent with her partner and six-month-old baby. She told the BBC about her experience:

We stood outside our home on Saturday and watched as the volcano erupted and a huge billowing cloud of ash was sent into the air. It was incredible but also terrifying.

Since then we’ve been sheltering indoors with everything closed.

It’s scary thinking about what we can do to protect the baby from the ash. We’ve put sheets around the bottom of the doors to make sure none of it gets in.

We keep losing electricity, and we’ve had no running water since Thursday. Our local shop has run out of bottled water, and it’s very scary to think we could run out ourselves.

This could go on for weeks and neither of us can work because of the power supply issues.

The atmosphere is just very eerie. Everything is grey with a thick layer of ash and people are scared that these eruptions could get worse.