Ahead of Strict Lockdown

People leaving capital by any means 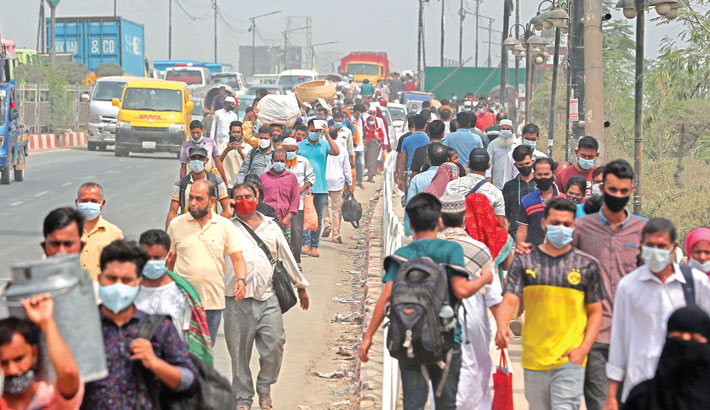 People in their thousands are leaving the capital for their village homes ahead of the eight-day complete lockdown. The photo was taken from Amin Bazar area in the capital on Monday. – Reaz Ahmed Sumon

Although operations of public transport, including buses and launches, remained suspended amid the ongoing restrictions aimed at containing the coronavirus transmission, people were leaving the capital in their thousands by alternative means ahead of the complete lockdown beginning tomorrow.

Long tailbacks were also created on major highways and even ferry terminals due to the heavy pressure of vehicles amid the huge rush of homebound people.

Bangladesh will go into an eight-day complete lockdown tomorrow in an effort to curb the spread of the virus.

The Cabinet Division issued a notification on Monday in this regard.

Government, semi-government, autonomous and private offices will remain closed while operations of all modes of communications suspended until April 21 midnight.

People will not be allowed to go outside without any emergency need.

Only emergency services will be allowed to operate during the stricter shutdown.

Following the announcement of the lockdown, a huge number of people, mostly lower-income groups, started leaving the capital for their village homes by small vehicles -- private cars, microbuses and CNG-run auto-rickshaws.

Traffic jam was created in Madanpur, Kanchpur, Chattogram Road and Signboard areas of the Dhaka-Chattogram highway in Narayanganj.

About 3-km stretch of the highway from Gouripur bus stand to Shahidnagar in Daudkandi of Cumilla also experienced slow vehicular movement. Officer-in-charge of Kanchpur Highway Police Station Md Moniruzzaman said the number of vehicles started to increase after 9am “Most of the vehicles are goods-laden trucks and personal.”

He also said people were leaving Dhaka following the announcement of the strict lockdown.

Meanwhile, people in large numbers thronged different markets and shopping malls in the capital on Monday.

Severe traffic congestion was created around different city shopping malls, including New Market, Gausia, Mouchak, Chawkbazar, Islampur and Rajdhani Supermarket. Many said they came out of their residences to finish their tasks as the government is going to enforce a stricter lockdown from tomorrow.

People were seen thronging kitchen markets, banks, shopping centres and even many government and private offices.

Many people said they were stranded on the roads due to traffic jam. Many others said they had to wait in queues at banks and other offices to get services.