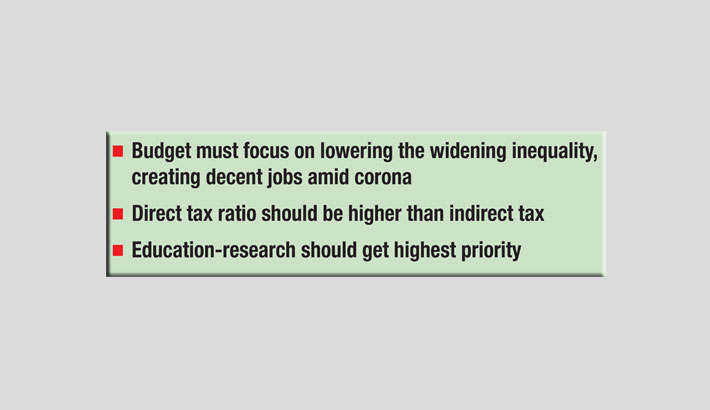 The upcoming 2021-22 fiscal year’s national budget should be at least Tk 15 trillion to fight corona crisis as well as build the nation in light with the spirit of the Liberation War, suggests Bangladesh Economic Association (BEA).

BEA said the budget should apply all the tools designed to immediately lower inequalities in income, wealth, health and education as corona has intensified the already existing inequalities in the country.

It said the rate of poverty in the country has been double after corona pushed a large section of non-poor people below the poverty line, creating a bunch of “new poor.”

Gini co-efficient, a measure of inequality, soared to 0.635 after 66 days of corona lockdown from 0.482, while Palma ratio, where the richest 10 percent of the population's share in GNI is divided by the poorest 40 percent's share, jumped from 2.92 to 7.53, it noted.

The government should undertake scheme like the New Deal programme taken during the Great Depression of 30s to create huge but decent job for the marginal workers who became vulnerable after the crisis, BEA suggests.

More budget money should be channeled to the sectors that can quickly remove poverty and inequalities, have long term positive social impacts, can contribute to agriculture, domestic industrialization, creating domestic market and can intensify human resource development, according to BEA.

Education and research should get the highest priority in the new budget followed by social security and welfare, transport and communications, power and energy, public administration, agriculture and health, local government and rural development, among others.

It proposed for raising ratio of direct tax against indirect tax, saying that indirect tax is ultimately transferred to the poor, which enhance inequalities.

It said it is very much possible to formulate a budget free of foreign loans with the argument that foreign loan dependency is hurdle to independent development of the country.