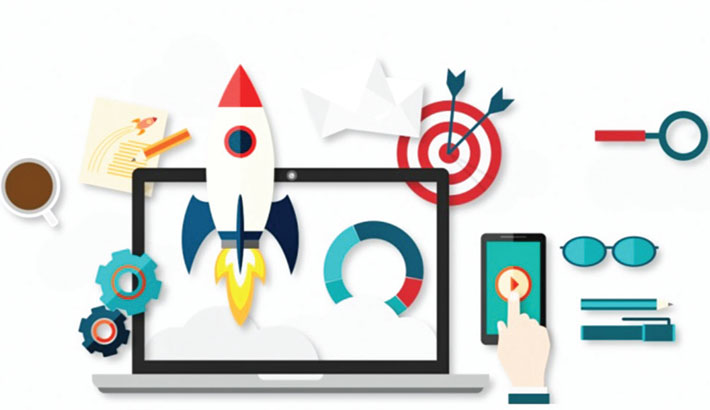 A significant date for a Bangladeshi entrepreneur who started his journey to tell stories on a digital platform was March 25, 2021. And that's when the new story began. It was eight o'clock in the evening. All, from a small start-up to a large corporation, is focused on the content of Bangladesh's 50th Independence Day and its history on March 26.

An announcement came from a virtual award function at the time, stating that the co-founder of that organization had won an award. 'Inspiring Female Startup Special Mention' was the title of the award.

The initiative of the WIL Inspiring Women award, organized by Bangladesh Brand Forum, was taken. This is a huge accomplishment for this tiny start-up that has come so far in just two years; it might seem to be a minor prize, but what else could it be? However, the story of this small award and the startup's struggle is very different.

In just ten months after they began their journey on April 17, 2019, they have acquired the work of many well-known Bangladeshi brands. Everyone believes in and loves this brand new company, which is a huge accomplishment. In March 2020, the Corona outbreak struck, along with a slew of other roadblocks.

What will become of this small business? When would you come to a halt? No, the dream did not stop them, but it is fair to say that it is this dream that has led them to where they are now. Storytellers have worked 24 hours a day, 7 days a week to keep their visions alive. Do you have any idea what their visions are? Telling stories that make people laugh, weep, remember, and dream is what I do.

As the corona virus outbreak struck, this group worked to make their dreams come true on the one side, while still standing by the people on the other. No journey is straightforward, not even the one we're on right now. There have been many challenges, barriers, and roadblocks.

There was little that could deter the storytellers from telling their tales. The Grameenphone, ACI, Parachute Oil, Twelve Clothing, Center New, UNDP, Cycle Life, Savlon, Tecno phone, Tata Motors, Imo, and many others have collaborated with them in just two years. Each of their visions and experiences has had an effect on the lives of others.

On February 14, 2021, they shattered the traditional love tale by bringing the story of an individual who is completely uninterested in our society. Our storytellers choose them because they believe that love belongs to everyone.

They tell stories about such people on February 21, 2020, and Independence Day, 2021, who may not have voices but do have their own languages, who are part of us, who love our different language, and who we are on our way to.

They create music videos, which allows new songs by new artists to be released. No one wants to give them a chance, no one knows the story behind this album, and no one wants to collaborate with them. That is why storytellers are telling their tales.

They are discovering the story of an unstoppable person's inspiration, as well as tales of inspiring people from all over Bangladesh, who are inspiring hundreds of others.

The people we're talking about say stories, dream about stories, think about stories, and make stories, so stories are in the name. This group of young storytellers will become two on April 17, 2021.

As a small group of people, the team has changed many times, but the dream has remained the same, and they are still telling the stories because they are dedicated to seeing the dream realized. These storytellers' ambition is to go even further. They will find stories in every phrase, rhythm, joy, happiness, sorrow, laughter, and music, and our storytellers will be the ones to say them.

People who grew up hearing Thkurmar Jhuli's story will now hear Jhuli's story in this collection of Only Stories. There are still a lot of stories to come out of the bag, but the journey will continue. Our storytellers are celebrating their second anniversary today. Happy Birthday and Happy Birthday, and we hope to hear from you soon.

Wishing Them Happy Birthday with this, The Stories must go on with Just Storys.