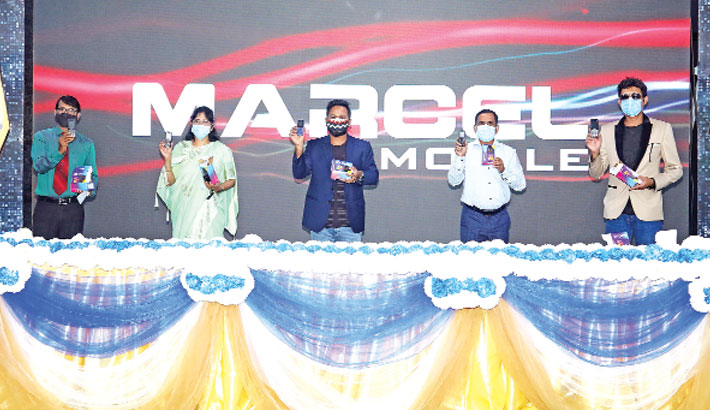 Officials of Marcel pose for a photograph with Marcel’s feature phones at the launching ceremony at the company’s corporate office in the capital on Thursday.

Marcel has launched ‘Made in Bangladesh’ tagged feature phones in the domestic market.

Marcel announced the commencement of its mobile phone marketing activities at a launching ceremony held at the company’s corporate office in the capital on Thursday.

Company’s Director S M Manjurul Alam greeted the customers and well-wishers of Marcel in a video message on the occasion.

Marcel released three models of feature phones- Axino A01, A25 and B50, in the market, said a press release.

The phones are available from all Marcel showrooms.

Marcel mobile will be at the top of the customers’ choice with the latest technology features and smartphones, he added.

There are over 76 service points across the country along with separate service stations for mobile phones.

Marcel Mobile Project Operation Manager Habibur Rahman said that Marcel is producing mobile phones according to the standards of the International Organization for Standardization (ISO).

“Marcel’s attractively designed and featured smartphones will be released soon in the market,” he said.