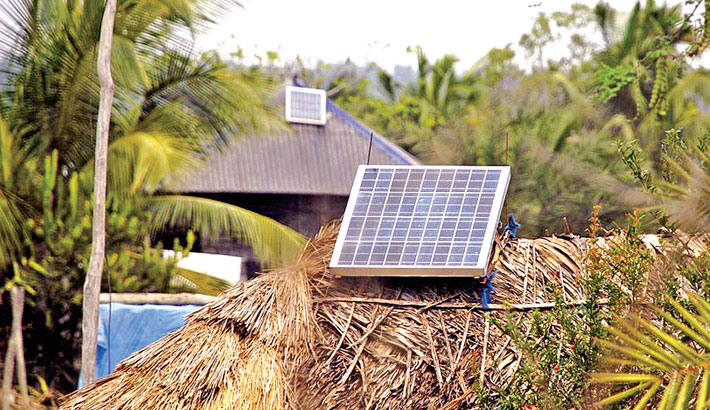 A solar power panel on the roof of a home in Koira upazila of Khulna. —Collected photo

As part of the government campaign for expansion of renewable energy sources in the country, solar home system illuminated houses of 2 crore marginal people.

He said being encouraged by the government’s steps and incentives for expansion of renewable energy in the country, entrepreneurs have been setting up SHS.

He said the government will continue incentives and cooperation in expansion of renewable energy in the country.

According to the ministry source, solar energy is the most potential source of renewable energy in Bangladesh due to its geographical location.

It said it has been possible to generate 490 MW power from solar energy, of which 250MW electricity is coming from solar home systems, installed as a stand-alone off-grid in remote areas.

The government has a plan for universal access to quality electricity in a cost-effective and affordable manner.

Realizing the ever increasing demand of electricity for socio-economic development and progress of the country, the government has initiated sub-regional cooperation in the field of power generation, grid connectivity and overall energy security.

Cooperation has been initiated through SAARC, SASEC and BIMSTEC for sharing of hydropower through cross-border connectivity and capacity development.

Mentionable, more than a quarter of the rural population in Bangladesh still does not have access to electricity. For millions of people, daily activities like cooking, working and studying are difficult, or even impossible, after sundown.

But off-grid solar power is rapidly changing all this.

Bangladesh has one of the world’s largest domestic solar energy programmes. The World Bank and other development organizations, along with the private sector, are working with the government to bring affordable, solar-powered electricity to places where the traditional grid doesn’t reach.