Return of US to Paris deal adds new momentum to climate diplomacy: PM 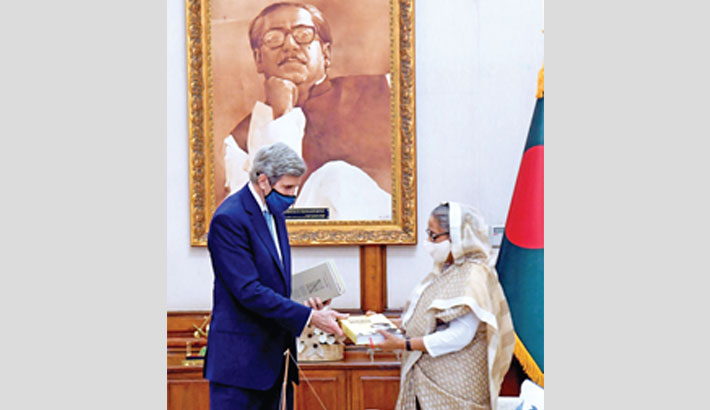 US Special Presidential Envoy for Climate John Kerry receives a copy of the biography of Father of the Nation Bangabandhu Sheikh Mujibur Rahman from Prime Minister Sheikh Hasina at Ganabhaban in the capital on Friday. – PMO PHOTO

Prime Minister Sheikh Hasina on Friday said return of the United States to the Paris Agreement on climate change would add new momentum to the climate diplomacy.

“Returning of the US to the Paris Agreement will create new momentum to the climate diplomacy,” she said when the US special presidential envoy for climate John Kerry called on the Prime Minister at her Ganabhaban residence in the capital, reports BSS.

The Prime Minister highly appreciated the return of the US to the Paris Agreement.

Sheikh Hasina thanked US President Joe Biden for inviting her to join the Leaders Summit to be held on April 22-23, 2021 virtually while John Kerry thanked the Bangladesh premier for accepting the invitation.

As many as 40 countries will take part in the summit.

During the meeting, Kerry said they can give Covid-19 vaccines to Bangladesh if it wants, as the US demand for the vaccine will be met by the mid-summer.

The special envoy of the US President put emphasis on using alternative source of energy like the renewable ones that include solar energy alongside hydroelectricity to reduce the risk of pollution.

Kerry said that the US companies are keen to invest in the renewable energy sector in partnership with others.

The Prime Minister said that they are not emitters and their contribution to the emission is negligible, adding, “We alongside the vulnerable countries will be affected.”

But, she said, her country needs energy for development.

The Prime Minister said that they have talked to India, Bhutan and Nepal to set up hydropower plants in a bilateral or trilateral way on regional basis.

She said that the country has 5.8 million solar connections, adding that solar energy is necessary for irrigation.

Sheikh Hasina also said that her government has formed the Climate Trust Fund along with other initiatives to face the adverse impacts of climate change.

Besides, the premier said, as many as 11.5 million saplings have already been planted across the country at the government initiative while 10 million were planted by her party leaders and activists.