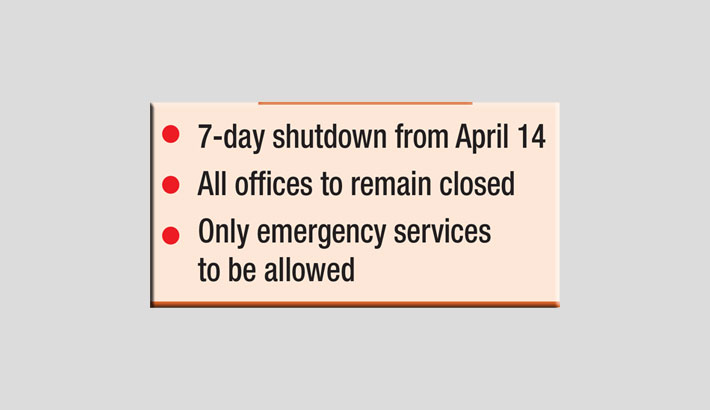 The government is planning to enforce a weeklong complete lockdown in the country from April 14 in an effort to contain the coronavirus transmission.

During the lockdown, all government and private offices and factories, including garment ones, will remain closed while the movement of people and all modes of vehicles suspended.

Only emergency services will remain in operation during the period.

Two influential Cabinet members came up with such information on Friday as the ongoing seven-day restrictions aimed at curbing the virus spread failed to yield any positive outcome.

“The government is planning to enforce another weeklong complete shutdown from April 14 as the country’s coronavirus situation has taken a terrible turn,” Road Transport and Bridges Minister Obaidul Quader told a virtual briefing.

He said people are not abiding by the health protocols despite the ongoing restrictions. “Under such circumstances, the government is mulling over imposing a complete lockdown for another week from April 14 in public interest,” he said.

But, health experts suggested that the government should enforce a complete lockdown for at least two weeks as both deaths and infections from coronavirus are on a sharp rise.

Following the worsening coronavirus situation, hospitals in Dhaka are struggling to provide treatment for patients while no ICU bed remains unoccupied, they said, adding that the situation could worsen if Covid-19 infections rise in districts.

Earlier on Wednesday, the National Technical Advisory Committee on Covid-19 suggested enforcing strict restrictions across the country to curb the spread of coronavirus.

According to the Directorate General of Health Services (DGHS), 7,462 new cases and 63 more deaths were registered from the virus over the last 24 hours till Friday morning, taking the tallies to 666,132 and 9,521 respectively.

He said a notification will be issued in this regard as soon as possible.

Talking about the nature of lockdown, Farhad said all government and private offices, except emergency services, will remain closed during the weeklong strict lockdown from April 14. “No one will be allowed to move from one place to another. Although there’s laxity in some cases now, it won’t be allowed during the next spell,” he said.

However, the army will not be deployed during the lockdown, he said.

The government enforced a weeklong lockdown on April 5, slapping restrictions on the movement of people and public transport and closing all shops and markets.

It, however, allowed operations of public transport in Dhaka and other city corporation areas from Wednesday while shops and markets reopened on a limited scale on Friday for five days.

Only inter-district links remained disconnected during the current spell of lockdown.