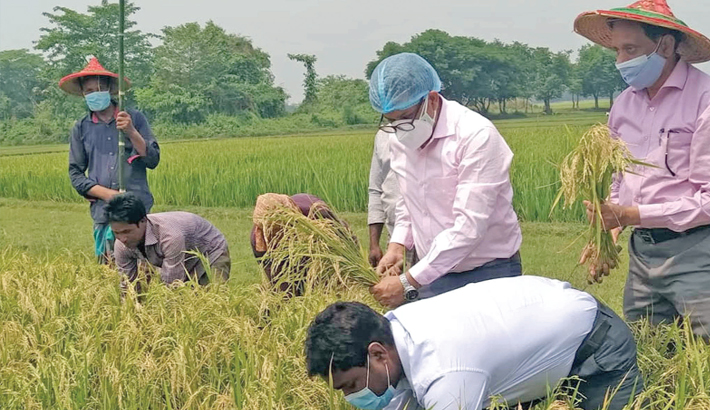 MOULVIBAZAR: Farmers in the district have started harvesting their Boro paddy with a hope of bumper production.

This time, farmers cultivated Boro paddy exceeding the target in seven upazilas of the district and harvesting has already started, said agriculture officials in the district.

Various high-yielding and hybrid varieties of paddy have been cultivated on vast areas of the district.

If there is no disaster or natural calamity, the production will be higher than the target, said marginal farmers and agriculture department officials.

Abdul Hakim, a farmer from Mukambazar area of Rajnagar Upazila, said, “The Boro paddy yield is very good this time. Due to favorable weather, proper use of fertilisers, pesticides and irrigation, the paddy has grown much longer.

The farmer expects that they will get 16-18 maunds of paddy per bigha.

Deputy Director of Department of Agriculture Extension (DAE) of Moulvibazar Kazi Lutful Bari told, 56,345 hectares of land have been brought under Boro cultivation this season with a production target of 2,17,000 tonnes of the grains.

The Agriculture department also said that weather condition was favorable, no shortage of diesel, fertilizers, no attack of pest and no load-shedding of electricity were the main reason behind the bumper production of Boro paddy in Moulvibazar district.

Speaking on the occasion DC Mir Nahid Ahsan urged the farmers to cultivate high yielding variety of Boro paddy to get desired output against the crop to achieve country’s food security.

Farmer Rowson Miah, owner of the land, expressed their deep satisfaction over the production as he had got 20 maunds of paddy from a bigha of land.

Due to the corona situation, there is a serious crisis of labourers to harvest paddy. However, combine harvesters are being provided to the farmers by the government at a subsidized rate to cut paddy and overcome the crisis.

In seven upazilas of the district, 54 combine harvesters, 151 reaper machines have been sanctioned for the farmers, according to sources at the DAE.

DAE Deputy Director Kazi Lutful Bari said they have provided all the necessary cooperation and advice to the farmers since the beginning of Boro cultivation.

Besides, a favourable weather also contributed to good yield of Boro paddy in the district this season, he said.