‘79pc marginalised households yet to get thru financial hardship’ 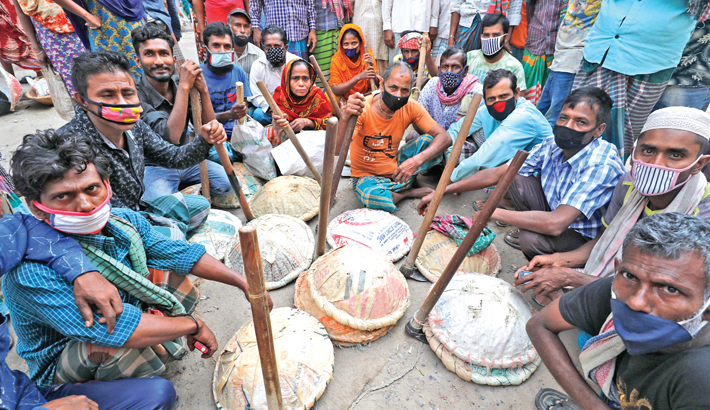 About 79 per cent marginalised households in the country are yet to fully overcome the financial hardship caused by the coronavirus pandemic, according to a study.

The findings of the study titled “Marginalised Communities in Bangladesh: Dealing with Pandemic Fallouts” were disseminated at a virtual programme on Thursday.

The survey also revealed the adjustment and adaptation efforts with pandemic-induced economic and social crisis.

The survey was conducted among around 1,600 households in char, haor, coastal and slum areas, dalit and indigenous communities, individuals with disabilities, owners of micro, small and medium enterprises and migrants.

According to the study, the marginalised groups experienced a 15.8 per cent drop in income while their expenditure declined by 8.1 per cent on average during the pandemic.

As a coping strategy to mitigate impacts of the Covid-19 fallout, 80.6 per cent households cut food expenses while 64.5 per cent non-food expenses, said the study.

It also found that 20.8 per cent households withdrew their savings while 47.9 per cent took loans and they will need 2 years and one month to repay principal loan amounts at the current rate of household savings.

The study mentioned that at least one member lost job or had to shut business from 70 per cent marginalised households.

Although at least one member from 68 per cent households rejoined work, their income has not reached the previous level, it said.

Dr Debapriya stated that the impacts of the pandemic on marginalised people are greater than that at the national level.

The Covid-19 influx came multi-dimensionally not only in employment but also in income and savings. Long-term impacts on malnutrition, violence and school dropout are also observed in the marginalised groups, he said.