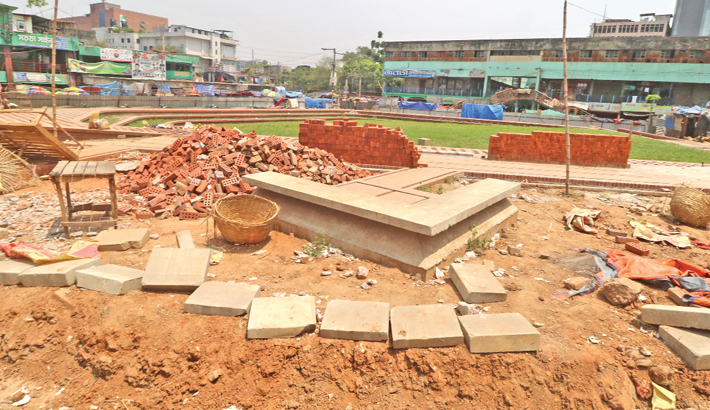 Renovation works of a park in the capital’s Karwan Bazar area remain halted for long. The snap was taken on Thursday. - Md Nasir Uddin

A project to modernize 22 parks and playgrounds of Dhaka North City Corporation (DNCC) is yet to be completed though the deadline expired back in June 2020.

DNCC officials said that they need an extension of time by a year to finish the project which kicked off in January 2017.

Of the 22 parks and playgrounds, the development work of only five is now over while the work of three is yet to start.

The document also says that there has been 30 percent progress in the development work of  Banani Playground on Road 27,  10 percent in Fazle Rabbi Park, 35 percent in Lalmatia Triangular Park while Lalmatia D Block Playground, Karwanbazar Playground, Shia Mosque Playground has made 60 percent progress.  DNCC superintending engineer (environment, climate and disaster management circle) Tariq Bin Yousuf, also director of the project, said that due to illegal occupation in the parks and playgrounds and consultation with the public, they could not start and finish the work on time.

“Local Government, Rural Development and Cooperatives Ministry formed a committee to evict the illegal grabbers. But now we have decided to carry out development work of some parks and playgrounds with revised design and without eviction,” Tariq said.

He said that not getting the approval from the planning ministry for the revision of the project is another reason for the delay.

“We could not pay contractors because the project needs an approval for revision. Almost all of other government projects were extended by a year amid Covid-19 situation excluding this one. We forwarded a proposal in March last year but yet to get response.

“A meeting for the approval of the revision of the project was scheduled to be held on Monday (April 5) but it was suspended too.”

Tariq said that they started the project with 26 parks and playgrounds but four were excluded later from the project while the main budget of the project was revised from Tk 279 crore to Tk 206 crore.