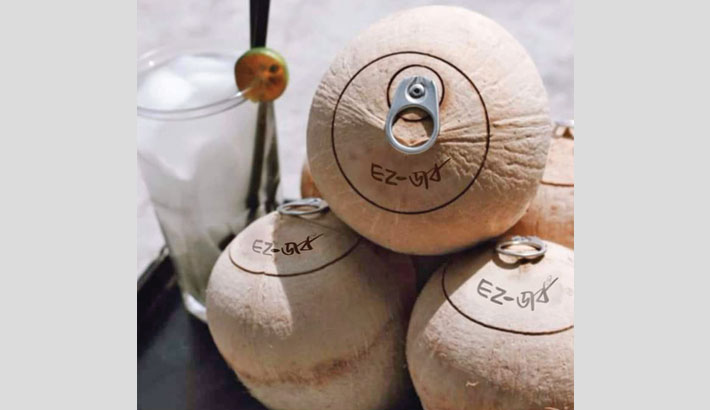 With summer creeping in, drinking green coconut from unhygienic street vendors to get a relief from sultry weather is now over as ‘EZ-Dub’ has hit the market.

Energy Smart Bangladesh as part of its green initiatives has come up with an innovative idea to introduce a new way of drinking germ-free green coconut for making life easier.

Now, drinking coconut to quench thirst has been hassle-free and it is just like drinking a can of soft drink, says Energy Smart Bangladesh.

“We want to put an end to people’s usual habit of drinking green coconut in unhygienic environment. EZ-Dub’s main goal is to give people the taste of natural green coconut in this mechanical city,” business development manager

“People can anytime be infected with germ from street vendors. But EZ-Dub has been UV sterilised, vacuum packed and laser cut to make it virus and bacteria-free,” he added.

The company claims that it can be stored for 15 days because of the technology used for the production.

The idea of involving all these technologies in marketing green coconut is totally a new idea across the globe, the company claims.

Consumers have to spend Tk 98 for having the taste of EZ-Dub, which is already available at departmental stores.

“Immediate consumers’ response to our new product is impressive as we’re already getting orders from departmental stores,” the marketing officer said.

They have a plan to enhance production capacity and make available EZ-Dub across the country in near future, even though they are now offering dealership in Dhaka city only.  Energy Smart Bangladesh says it believes that a great amount of work need to be done for creating awareness and improving livelihood in a country like Bangladesh which is a most vulnerable country to the climate change impact.