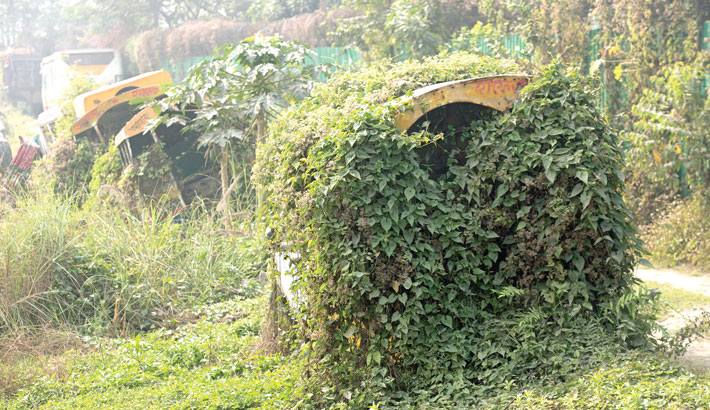 Seized vehicles, which have long been lying dumped along the Dhaka-Chattogram highway at Kanchpur in Narayanganj, are getting damaged. The photo was taken on Wednesday. – Reaz Ahmed Sumon

With full body covered with weeds and almost half of all four wheels sunk into the ground, it would hardly be possible for anyone to tell that it is a leguna.

The vehicle neither has front windscreen and windows nor rear-view mirrors. And the whole cabin is occupied by tree leaves.

The dilapidated leguna has been kept on the Jatrabari Police Station premises in the capital without any care since it was seized at the end of 2010.

The vehicle was seized as evidence as a group of four muggers used it to commit robbery after stealing it from an automobile workshop.

Four accused were arrested. Back then a case was filed and a charge sheet was submitted against them, said a constable of the police station, wishing anonymity.

“In the last 10 years, the case has been going on and the actual owner of the vehicle didn’t come to take it back,” he said, adding that until the case is settled the court would not give any direction to remove the leguna or auction it off.

While visiting several police stations and dumping grounds in the capital, this correspondent has found that like this leguna, hundreds of such vehicles are left uncared for on the premises of the police stations or in adjoining open spaces for years, turning those into dumping stations.

Most of these vehicles usually came in handy to the criminals for hit-and-run, cheating or theft of any kind, and later were seized when the perpetrators were arrested by law enforcement agencies.

As per the law, police should put the vehicles up for auction after taking permission from court if claimants are not available.

But, most of these vehicles are seen rusting away due to lack of maintenance and utilisation and in absence of a shade during rainy season. Some of their conditions have become so deteriorated that they would only be sold to scrap dealers.

Asked about the situation of seized vehicles, Noor-E-Azam Mia, officer-in-charge of Banani Police Station, said, “We do nothing to these vehicles without the instruction of the court as these are seized as evidence of the cases. When the cases are settled we try to handover these to the owners through court order.”

“After completing all procedures if we don’t get the owner of the vehicle, we put it up for auction following court’s instruction,” he said, adding that it takes a lot of time to settle a case and there is no particular place to keep the vehicles in police stations.

But, the DMP is yet to have a permanent dumping station.

Additional Deputy Commissioner of the Media and Public Relations of Dhaka Metropolitan Police (DMP) Iftekhairul Islam said, “It is really hard to maintain such a large number of seized vehicles properly for long. We have been working to set up a permanent dumping station. If we get it, we would be able to ensure a better maintenance system.”