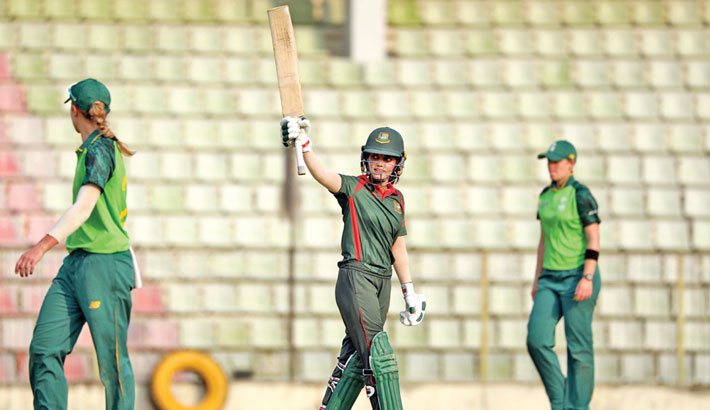 Bangladesh captain Nigar Sultana celebrates after scoring a century against South Africa Women’s Emerging Team during their second of the five-match one-day series at the Sylhet International Stadium on Tuesday. — BCB PHOTO

Nigar scored unbeaten 101 off 135 balls with 11 fours in her innings while Rumana Ahmed made 45 not out as Bangladesh team reached 197-3 in 45.3 overs after restricting the visitors to 196-8 in their stipulated overs.

The win also ensured Bangladesh taking a 2-0 lead in the series after they won the first one-day by 54 runs on Sunday at the same venue.

The visitors, however, made a flying start with their openers – Andre Steyn and Robyn Searle put up a 57-run stand before the latter was dismissed by Ritu Moni for 19.

South Africa lost two more quick wickets but Steyn and Anneke Bosch shared a 78-run stand for the fourth wicket to take the visitors close to the 150-run mark.

Salma Khatun trapped Steyn leg before to break the crucial stand after she made 80 off 118 balls with seven fours. Bosch followed Steyn in the next over to get dismissed on 42 and the visitors found it hard to cross the 200-run mark against Bangladesh in the contest after the bowlers did a great job in slog overs.

Nahida Akter and Ritu claimed three wickets each for the hosts.

Despite Bangladesh being reduced to 3-82 in 22.1 overs, experienced campaigners - Nigar and Rumana shared an unbroken 115-run stand for the fourth wicket to take Bangladesh to victory.

The third match will take place on Thursday at the same venue.