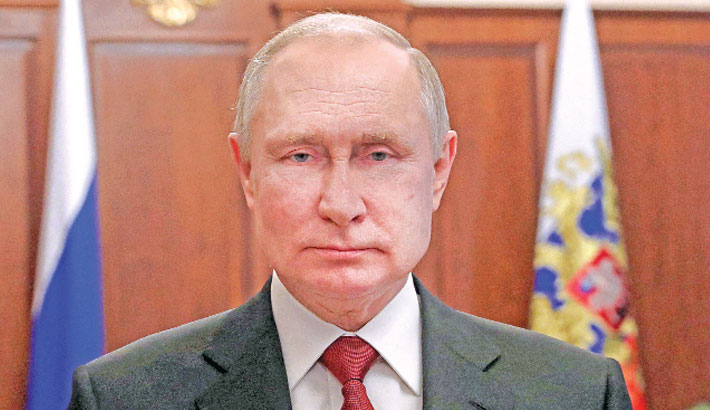 MOSCOW: Russian President Vladimir Putin on Monday gave final approval to legislation allowing him to hold office for two additional six-year terms, opening the possibility for him to stay in power until 2036, reports AFP.

The 68-year-old Russian leader, who has already been in power for more than two decades, signed off on the bill Monday, according to a copy posted on the government’s legal information portal. Putin proposed the change last year as part of constitutional reforms that Russians overwhelmingly backed in a vote in July. Lawmakers approved the bill last month.

The legislation will reset presidential term limits, allowing Putin to run in elections again after his current and second consecutive term expires in 2024.

Putin was first elected president in 2000 and served two consecutive four-year terms. His ally Dmitry Medvedev took his place in 2008, which critics saw as a way around Russia’s limit of two consecutive terms for presidents.

While in office, Medvedev signed off on legislation extending terms to six years starting with the next president. Putin then returned to the Kremlin in 2012 and won re-election in 2018. The term reset was part of constitutional reforms that included populist economic measures and sweeteners for traditionalists such as an effective ban on gay marriage.

Russians voted yes or no to the entire bundle of amendments in a vote last summer that was held over the course of a week, in a move authorities said was aimed at limiting the spread of the coronavirus but critics said left the process open to manipulation. Golos, an independent election monitor, criticised the format of the vote, saying Russians should have been able to vote for each separate change.

It also said it received hundreds of complaints of violations, including people voting multiple times.

Russians ultimately voted 78 percent in favour of the changes. Kremlin opponents have said the constitutional reforms were a pretext to allow Putin to become “president for life”. Putin would be 83 or 84 when he leaves office if he is elected and serves two additional terms to their end in 2036. “They really think that if they managed to deceive human laws, then they will be able to deceive the laws of nature,” opposition politician Yevgeny Roizman wrote on Twitter.

The bill also includes new requirements for presidential candidates. They must now be at least 35 years old, have permanently resided in Russia for at least 25 years and have never had foreign citizenship or a permanent residence permit from a state other than Russia.

Also on Monday, Putin signed off on legislation banning insults against World War II veterans, with offenders facing possible sentences of up to three years in jail.

The new law comes after a judge in February ruled that jailed opposition politician Alexei Navalny was guilty of defaming a World War II veteran.

The veteran was among a group of Russians Putin’s top domestic critic called “traitors” for appearing in a video supporting the constitutional reforms.

The new legislation also comes as authorities ratchet up pressure on the opposition and clamp down on dissent.

Navalny last week launched a hunger strike demanding adequate medical treatment in prison, saying he was experiencing severe back pain and numbness in his legs.

The 44-year-old opposition figure was arrested on his return to Russia in January, after spending months in Germany recovering from a poisoning attack last summer with the Novichok nerve agent that he blames on the Kremlin.

In February, Navalny was sentenced to a two-and-a-half year term in a penal colony for breaching the parole terms of a suspended sentence on old fraud charges.

Ten of Navalny’s allies including key aide Lyubov Sobol and his brother Oleg remain in house arrest on charges of violating epidemiological measures during a Moscow protest demanding he be released.

Navalny’s team on Monday called upon his supporters to register in an online campaign preparing for protests to demand the Kremlin critic’s freedom, saying Putin “will not leave on his own”.