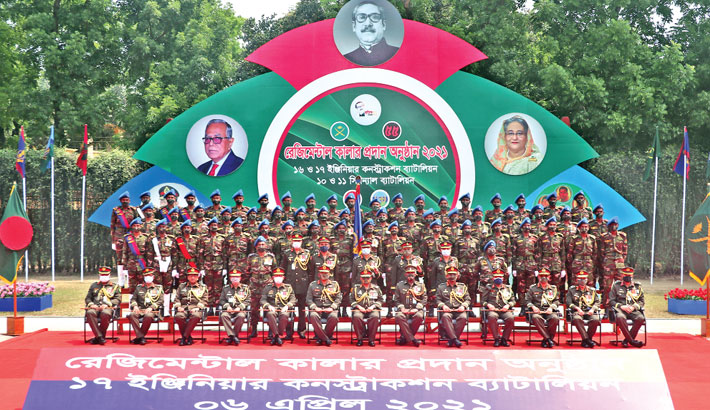 The 16th and 17th Engineer Construction Battalion and 10th and 11th Signal Battalion of Bangladesh Army participated in the colour parade and received the regimental flag from the chief guest.

Then, a smart contingent led by Parade Commander Lt Col Md Sahabuddin paraded and saluted the Chief of Army Staff.

The regimental colour is awarded to a unit or regiment in recognition of its heroic contribution to the great War of Independence, relentless efforts to establish peace in the Chattogram Hill Tracts, important contribution to the formation of the country and nation and success in various training and operational activities.

At the beginning of his speech, the Chief of Army Staff paid deep homage to the father of the Nation Bangabandhu Sheikh Mujibur Rahman.

He said Bangladesh Army has been making significant contribution to the socio-economic and infrastructural development of the country, including defending the sovereignty as well as dealing with natural and man-made disasters.

He instructed all the members of the army to come forward in any joint effort of the country.