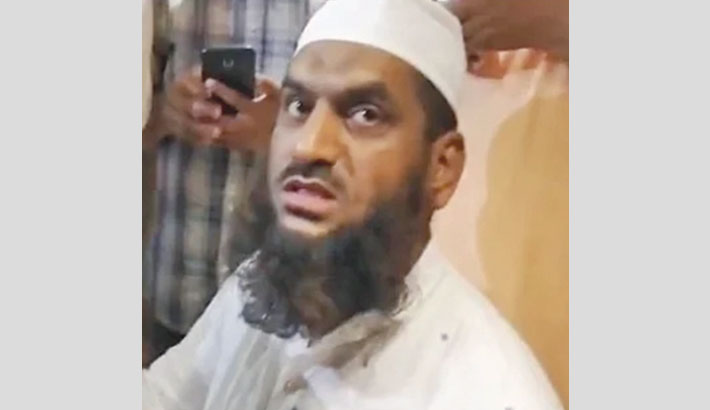 The eldest son of the woman, accompanied with Hefazat leader Maulana Mamunul Haque in a Narayanganj resort, has termed the leader as a ‘masked beast.’

Abdur Rahman, 17, son of the woman named Jannat Ara Jharna, uploaded a statement on his Facebook account, which went viral.

“Don’t be a devotee to anybody blindly. Don’t believe anyone blindly as everyone has another look behind. This man bearing alem (Islamic scholar) is a masked beast. He waits for a chance how one can be weakened,” he said in the statement.

Abdur Rahman with his younger brother Tamim is living with his father Hafez Shahidul Islam in Khulna.

“I have already grown up. I am learning and knowing many things. I have reached to a level of maturity. I can tolerate somewhat, but I have a younger brother. His age is 13 to 14 years. How much words of people we have to hear.”

“We cannot show our face in society. I never saw my younger brother to stay awake till dead night. But after hearing the incident, he had no sleep in his eyes last night.

“He left the residence. He left, saying, ‘I do not know what I shall do if I stay at home.’ He was shocked at the matter,” he said.

“I have to say more. I will say that it is the result of our father’s action. My father believes in people blindly. He loves people madly. That man (Maulana Mamunul Haque) had a mahfil (Islamic programme) at Mollarhat. Police did not allow him to perform it.” “After seeing this, my father cried greatly. Earlier, I came to know the man (Mamunul) had a relation with my mother. I was laughing thinking that my father was crying incessantly for the man (Mamunul) who betrayed him,” he said.

“After that, when police took Mamunul to police custody, my father requested OC Kamruzzaman to release him (Mamunul) keeping him in the custody. My father can do so having how much love. Yet that the man (Mamunul) betrayed him,” he said.

“It was the incident when our parents did not separate. I was very small and my brother was in my mother lap. One day, my father was not in our house. I was at our house. My mother was feeding breastfeed to my brother in her room. At that time, the man (Mamunul) entered her room and kept an illicit proposal. Buy my mother refused, saying, ‘You are cheating your close man, friend. At that time, he returned.”

“But he grew a lust in his mind since then. He could not handle greed. He was finding a chance. He tried to create a gap between our parents whenever they were locked in quarrelling over family related matters. In such a way, he destroyed a happy family. It has no account he (Mamunul) destroyed how many families like this way,” he said. Some local people caught Mamunul, joint secretary general of Hefazat-e-Islam Bangladesh, with a woman at room No. 501 of Royal Resort at Sonargaon in Narayanganj on Saturday evening.

Mamunul claimed the woman Jharna to be his second wife, but two phone records among him, his wife and sister proved his claim to be false.