Can SLC manage their govt for Tigers’ 3-day quarantine? 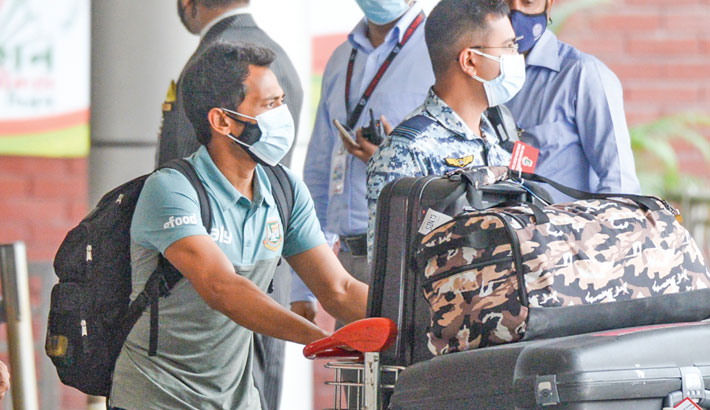 Wicket-keeper batsman Mushfiqur Rahim is coming out of the airport in the capital on Sunday after a 40-day tour of New Zealand. —BCB PHOTO

Bangladesh Cricket Board can remain optimistic regarding their tour of Sri Lanka as the host board insisted that they will have to do three-day quarantine despite the government ordered to have at least seven-day quarantine for foreigners.

According to the Health Ministry of Sri Lanka, if foreigners day one PCR test result is negative, tourists should stay in the same hotel until completion of day seven and can visit approved important sites in a biosecurity bubble from the date where Day One PCR report is available and up to seven days of arrival.

If febrile or display respiratory symptoms of COVID-19, should inform promptly to MOH area.

After completion of seven days, they should undergo a repeat PCR test on Day Seven, conducted by a Health Ministry approved private-sector laboratory and if the test result is negative then they can leave the hotel and are free to make their travel arrangements with the travel agent after getting the clearance from area MOH.

There is speculation in the air that chances are high that hotel quarantine can be extended to 14 days and it did not go unnoticed by BCB too.

Hearing such kinds of rumuors, BCB had contacted their Sri Lankan counterpart and they informed them that three-day quarantine is in place as it was included in the Memorandum of Understanding.

SLC had acted in a similar manner when the Bangladesh tour got postponed last time as they initially agreed for seven-day quarantine but retreated at the last moment after failing to convince their government to reduce 14-day quarantine. Bangladesh can take inspiration from the fact England was given the same Covid-19 protocols that they are expected to receive but in the previous instance after postponing the Bangladesh tour, SLC agreed to three-day quarantine for the English.

“We have talked with SLC this morning (Sunday) as we are hearing all those speculations regarding the 14-day quarantine but they informed us that we will have a three-day quarantine in place,” BCB chief executive officer Nizamuddin Chowdhury told reporters on Sunday.

“All the arrangements (for the tour) are in place but at the moment we are focusing on observing the country’s corona condition. I cannot say it is doubtful at the moment considering the government just announced the lockdown across the country,” he said.

“We will understand where we stand within a few days and a decision in this regard will be taken after consulting with respective authorities (government) as well as discussing with our Sri Lankan counterpart as well,” he added.

The series originally was scheduled to be played during October - November last year because at that time BCB did not agree to a 14-day mandatory quarantine that was proposed by the SLC.

Bangladesh are scheduled to play both Test matches at Pallekele International Cricket Stadium in Kandy. As part of the preparation, a two-day intra-squad warm-up game is scheduled on April 17-18 at CMC, Katunayake before they will take on the hosts in the first Test on April 21-25 while the second Test is slated from April 29 to May 3 at the same venue.

Bangladesh will be without their ace all-rounder Shakib Al Hasan and pacer Mustafizur Rahman during the tour, with both of them will take part in the upcoming Indian Premier League.

Shakib was granted NOC as he decided to skip the series to play in IPL while Mustafizur was given the NOC as he is not in the Test squad for the Sri Lanka tour. The series was initially planned in July but was postponed due to an outbreak of corona.