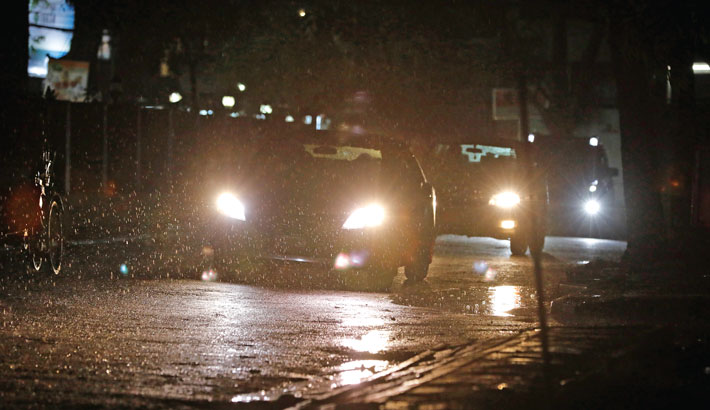 Motorised vehicles are moving slowly on a city road amid drizzling after a nor’wester lashed the capital and many other parts of the country on Sunday. — Kamrul Islam Ratan

A nor’wester swept across different parts of the country, including the capital, on Sunday, leaving four people dead and many houses damaged.

Four people, including three women, were killed, several others injured, many houses and trees were

damaged by the storm.

The deceased was identified as Jahanara Begum, 50, wife of Younus Ali at Dakerpara village of Polashbari upazila, Abdul Gaffar, 42, son of Abbas Ali at Mostafapur village of the upazila, Moina Begum, 47, wife of Solaiman Ali at Kishamat Haldia village of Sundarganj Upazila and Shimuli Begum, 26, wife of Bishnu Mia at Katlamari village of FUlchari Upazila.

They were killed after trees were uprooted on them during the nor’wester in Gaibandha, sources said.

Many semi-paka and tin-shed houses were damaged and trees were uprooted on the nor’wester.

Rain or thundershowers accompanied by temporary gusty or squally wind is likely to occur at one or two places over Rangpur, Rajshahi, Dhaka, Mymensingh, Sylhet, Chattogram, Khulna and Barishal divisions with hails at isolated places on Monday, Nazmul said.