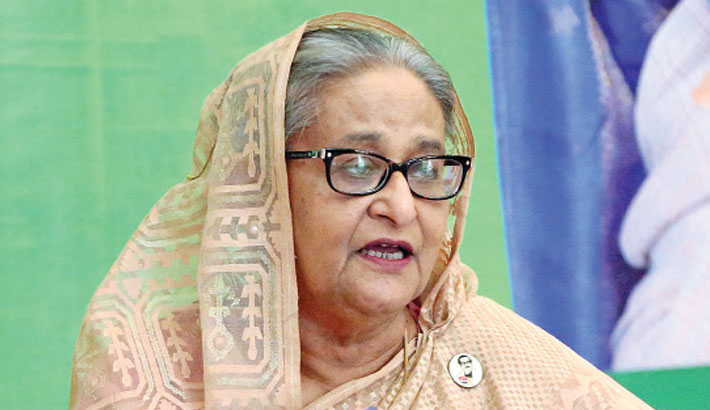 Prime Minister Sheikh Hasina on Sunday called upon the people to accept little suffering to be caused by the restrictions imposed by the government to contain the further spread of coronavirus.

“All may experience some problems for this. But saving people is first priority,” she said while delivering her valedictory speech in Parliament.

The premier urged the people to go by the rules of the restrictions to fight the second wave of the deadly virus.

“The second wave of the bug is going on. I think all must come forward to deal with the situation. I know there will be some problem….yet, all have to go by the decision,” she said.

“The second wave of the virus turns deadly across the world. We all must be aware so that the infection can no way increase further,” she added.

Sheikh Hasina came up with the call as the Cabinet Division on Sunday issued a notification imposing a seven-day restriction from today (Monday).

“Bangladesh progress was on despite the economic meltdown across the world. But coronavirus halted the economy slightly,” she said.

Talking over the recent vandalism, carried out by Hefazat-e-Islam, Sheikh Hasina said punitive actions would be taken against those involved in destructive activities using the name of Islam.

"People won’t accept any anti-Islamic activities in the name of religion. Defamation of Islam for a few people won’t be tolerated. I’ll tell the people of the country to have patience, everyone has to step forward with patience," she said.

Sheikh Hasina, also the president of the ruling Awami League, accused the Bangladesh Nationalist Party and its clique Jamaat-e-Islami for playing roles from behind the scene.

"Hefazat is not alone, BNP and Jamaat are with them," she said. “Which religion do they believe in?”

Talking about the celebration of the Golden Jubilee of Independence, she said that many foreign guests came to join the occasion, but Hefazat declared that they would not allow Narendra Modi to come.

Showing some pictures of March 26 Hefazat incidents, she said that a rumour was spread by Hefazat that one person was killed in Baitul Mukarram, then from March 26-31, they unleashed destructive activities across the country.

BNP-Jamaat's statement in favour of Hefazat on March 27 and 28 were part of anti-state conspiracy. On March 28, Hefazat called a countrywide hartal.

"On that day, they ransacked and torched AL office, houses of AL activists and various transport," she said.

The Prime Minister asked which religion they believe in as they burnt the Holy Quran.

“Law will take own course,” she said.

She asked Hefazat leaders and activists why they set fire to AL and BCL offices and their party leaders’ houses.

"They’re playing with fire, fire can spread from one house to another house, don’t they take this into consideration?" she said, adding that people will not tolerate these.

Regarding the utmost patience of police and other law enforcement agencies during the mayhem, she said that the government showed its highest patience to avert bigger confrontation as it wanted to celebrate the Golden Jubilee programme properly.

"Law will take its own course," she said.

Sheikh Hasina said that the woman who was introduced by him as his second wife actually works at a beauty parlour.

"Later, talking to his original wife, he (Mamunul) said that in the context of the situation," she said.

She questioned how anyone who has faith in Islam can tell a lie. "So, what religion will they follow and what’ll they teach the people?" she said.

Sheikh Hasina said that because of activities of a few people, the names of militants, terrorists and characterless are now linked with the name of Islam. "They’re just contaminating Islam, the religion of peace," she said.