Hefazat men snatch him from the spot 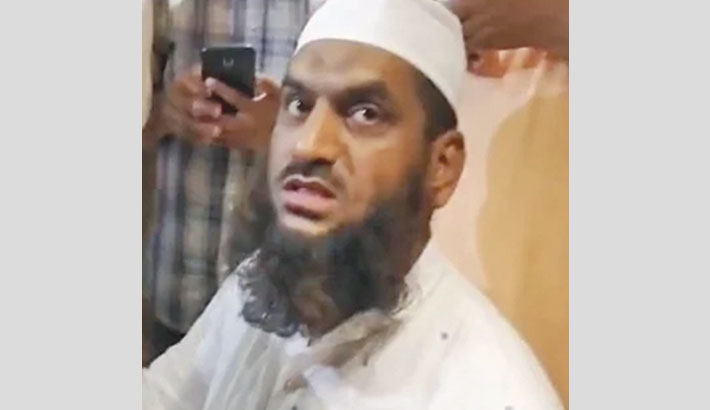 Hefazat leader Mamunul Haque was caught along with a woman at a resort in Sonargaon upazila of Narayanganj district on Saturday afternoon.

However, unruly activists of the organisation snatched him from the spot after vandalising the resort.

Mamunul, joint secretary general of Hefazat-e-Islam Bangladesh, checked in at room No. 501 of Royal Resort along with a woman introducing her as his second wife.

As the news spread around, locals started to gather at the resort in the afternoon, said Inspector (Investigation) of Sonargaon Police Station Tabid Rahman.

At one stage, they went to the room on the 4th floor of the resort, he said.

Many locals went live on Facebook and shared the incident.

In a video, it was seen that the local people were asking Mamunul about his relation with the woman. In reply, he described her as his second wife named Jannat Amina Tayyeba, saying he married her two years ago.

When asked why he boarded the resort if she was his wife, the Hefazat leader said they came to visit the area and checked in at the resort for refreshment.

One of the locals asked him why he was trying to flee after opening the door. In reply, Mamunul said he did not try to do so.

He also threatened to go for legal action against them as they misbehaved with him and his wife.

The Hefazat leader tried to snatch the mask of a man who was asking him different questions, creating a chaotic situation there.

Then, a policeman and another man were seen saving him from the local people.

ZayedulAlam, superintendent of Narayanganj police, told the Daily Sun that some locals caught Mamunul at the resort with a woman.

Being informed, a team of police rushed there and ensured his security, he said, adding that later, the Hefazat leader along with the woman left the resort safely.