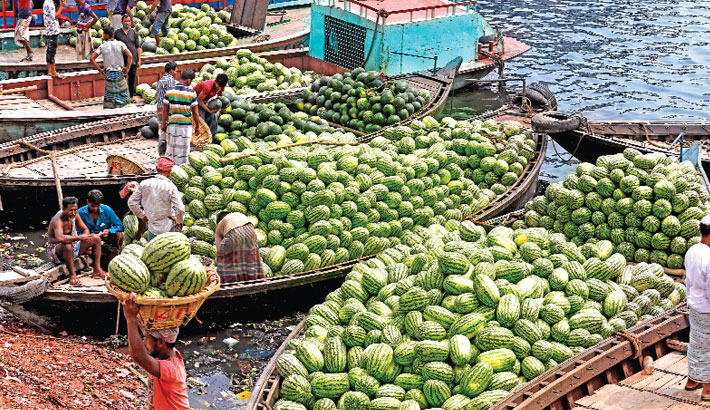 Traders from different districts are bringing watermelon to the capital as its demand is high amid a rise in temperature in the country. The photo was taken from Badamtali ghat area on Friday. —Kamrul Islam Ratan

Demand for watermelon, a juicy summer fruit, has increased in the city markets amid the rising temperature in the country.

The fruit has started appearing in different markets in the capital following increasing demand.

Watermelon sellers in Mohammadpur, Dhanmondi, Mirpur, Motijheel, Farmgate and other areas in the city were seen with smiling faces as they are profiting satisfactorily from sale of the fruit.

Lucrative price encourages farmers to cultivate the summer fruit in the tropical weather while the country has seen huge cultivation of all-seasons watermelon due to huge demand, said Mehedi Masood, project director of Year Round fruit Production and Nutrition Improvement Project of the Department of Agriculture Extension (DAE).

People in Bangladesh have already started feeling the heat of the summer. The pedestrians are found eating slices of the fruits being sold by street vendors.

Heat wave coupled with high humidity sweeping across the country for the last couple of days are affecting normal life of people.

Selim Hossain, a watermelon seller at Dhanmondi, said due to a rise in temperature in the end of March increased the demand for the juicy fruit.

There is a surge in the demand of watermelons as there is no rain right now. Usually, the summer season begins in late March and seasonal watermelon also appears on a large scale during the period.

The rising temperature and early arrival of summers this year might have increased the demand for watermelon in parts of the country.

Despite ample supply, the consumers are not getting the benefits of bumper harvest as the retailers are putting much higher price tags.

The retailers at Mohammadpur are selling watermelon for Tk 50 per kg while a watermelon weighs from 3 to 6 kg.